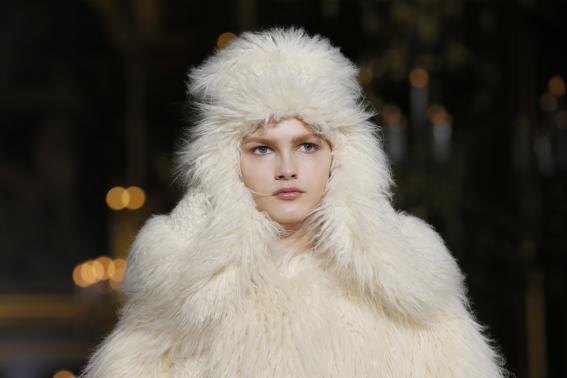 PARIS - Loose but tailored, flowing but structured - Stella McCartney presented a study in contrasts for her Winter 2015 ready-to-wear show on Monday in Paris in a collection both supremely luxurious and as relaxed as sportswear. McCartney's affinity for freely moving pieces that skirt the body without suffocating it found ample expression in the show at the opulent Opera Garnier, where father Paul McCartney was on hand, along with Kanye West and Woody Harrelson. Diagonals of thick ribbed knits draped the figure on long-sleeved dresses, lightened by gauzy sheer silk peeking out underneath. Trousers - which in McCartney's world usually hang low in the crotch - were high-waisted and cinched, but roomy in the thighs and leg for a fluid, sensual feel. Her standout faux furs featured along with wool coats in lodens and greys, and even black and white tweed, that were slim to the body but tied at the waist. A wool trouser suit recalled a classic grey sweatsuit in both color and comfort, but McCartney's version in light wool was pure luxury, with folds of fabric at the waist and cut-outs at the short sleeves giving movement and fluidity. But it was McCartney's faux fur coats in both black and ivory - reined in by geometric stitched patches at the sides and sleeves - that caught the eye. "If the fashion industry just for one season gave up fur and did fake fur as its replacement, it would have a massive impact," said McCartney backstage. "Over 50 million animals are being killed a year for fashion, and I don't agree with it." The designer said even the most discerning would not be able to tell the difference when looking at real versus fake. "In fact, I think mine would look better," she said. - Reuters