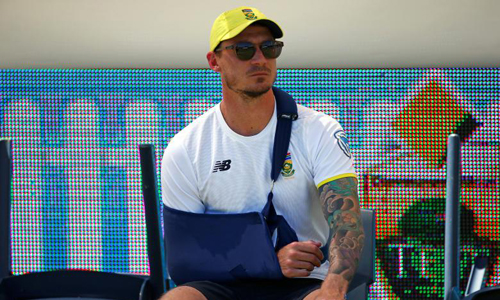 CAPE TOWN- Nov 19 South Africa pace spearhead Dale Steyn has not allowed a series-ending injury to prevent him from backing his captain Faf du Plessis over allegations of ball tampering, suggesting Australia are using the incident as an excuse for losing. Du Plessis was charged with ball tampering on Friday after Australian television pictures showed him applying saliva to the ball with a sweet in his mouth during the second test, which South Africa won to clinch the series with a match to spare. The International Cricket Council (ICC) could ban Du Plessis from one test match if he is found guilty, putting him in doubt for next week's third test in Adelaide. Du Plessis has pleaded not guilty. Hashim Amla and the rest of the Proteas squad made clear on Friday how they felt about the charge, the batsman describing it as a "joke" with his team mates standing behind him. Steyn added his thoughts on Twitter on Saturday. "Beaten with the bat. Beaten with the ball. Beaten in the field. Mentally stronger. Here's a idea, Let's blame it on a lollipop, #soft," he posted. Steyn later tried to clarify his comment with another post. "Just so we clear, I'm not blaming the aussies, but I won't let a fantastic series win be tarnished by some lollipop fabrication. 3-0 mission." A fractured bone in his shoulder, sustained in the first test in Perth, has ruled Steyn out for the remainder of the series and is likely to keep the paceman on the sidelines for six months. His fellow South African quick Kagiso Rabada also took to Twitter to give his opinion more obliquely, posting a dictionary definition of the word "excuse". Du Plessis may yet play in Adelaide starting on Thursday as Cricket South Africa have asked the ICC to give them time "to consult and appoint legal representation and make the necessary logistical arrangements". "We are now waiting on the ICC to inform us of the date for the hearing," chief executive Haroon Lorgat said in a statement. Du Plessis was fined 50 percent of his match fee for ball tampering in the second test against Pakistan in 2013 after being caught on camera rubbing the ball against a zip on his pocket. -Reuters