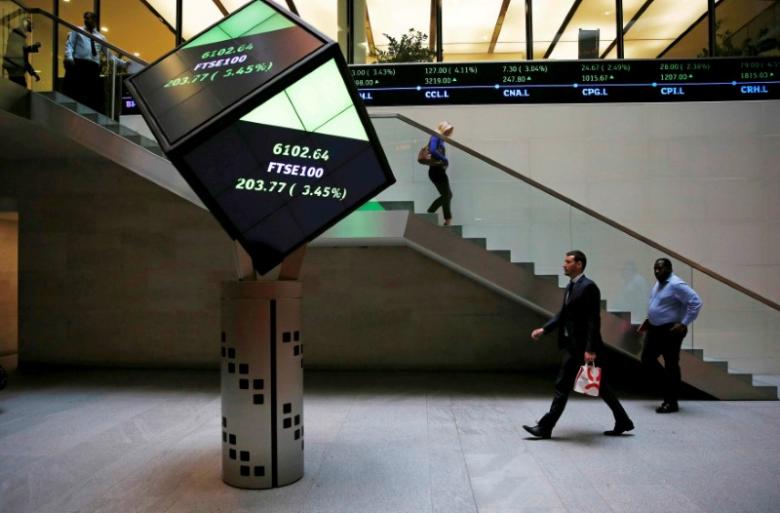 LONDON – World markets had a swagger about them on Tuesday as upbeat economic data and signs of a revival in inflation pushed up stocks and commodity prices and kept the dollar at a nine-month high.
Factory surveys in the United States and Europe had boasted the best readings of the year so far on Monday and a six-month high for Japanese stocks in Tokyo [.T] overnight had followed a record close for the tech-heavy U.S. Nasdaq. [.N] European markets started with Germany's Dax .GDAXI nudging its highest level of the year as the closely-watch Ifo sentiment survey beat expectations a day after purchasing manager numbers had done the same. The region's mining firms .SXPP were the standout performers though as they hit a 14-month top as zinc surged to a five-year peak and iron ore reached its highest since mid-2014, all of which should pick up the pulse of inflation globally. "We are seeing a pick up of economic activity against the backdrop of only one central bank -- the Fed -- that is likely to tighten policy and that is supporting asset markets," said CMC Markets senior analyst Michael Hewson. In the foreign exchange markets, the dollar .DXY took a breather having reached its highest since early February against other top currencies as traders continued to add to the bets on a December U.S. interest rate rise <0#FF:>. [/FRX] China's yuan CHH=D3 went the other way, hitting its lowest since 'offshore' trading was introduced in 2010 as Beijing nudged down official rates again [CNY=PBOC]. It traded as soft as 6.7882 yuan per dollar. The currency's fall of more than 1.5 percent since the end of September has prompted renewed suspicion of a possible extended slide in the yuan, even though officials have reiterated their expectations for a stable currency. But the weakness has revived memories of a shock yuan devaluation last August and another rapid depreciation early this year - falls that triggered a bout of global market turmoil. But analysts pointed out that during this round of yuan weakness, global risk sentiment was holding up. "That highlights the extent to which dollar gains are unlikely to be as extended as they were (in the past)," said BNP Paribas currency strategist Sam Lynton-Brown, in London. GOLDEN MINERS The cheer around the mining sector increased as a production update pushed up London-listed giant Anglo American's shares (AAL.L) up over 3 percent to take their gains this year to almost 270 percent. The staggering rise has made Anglo the top performing stock on Europe's STOXX 600 this year. In Asia, Japan's Nikkei .N225 rose 0.7 percent to levels last seen in April as a softening yen burnished the outlook for the country's exporters. Australian stocks added 0.6 percent and Taiwan.TWII 0.7 percent. Wall Street had taken encouragement from upbeat corporate results. Over one third of U.S. companies have now reported and 80 percent have beaten market expectations. Another third of the S&P 500 components are scheduled to report earnings this week, including heavyweights Apple (AAPL.O), Alphabet (GOOGL.O), Amazon (AMZN.O) and Boeing (BA.N). Merger and acquisition activity added extra fizz in the wake of AT&T Inc's (T.N) $85.4 billion bid for Time Warner Inc (TWX.N), though the deal seemed destined to face stringent scrutiny from regulators. In commodities, oil prices dipped on news of the impending restart of Britain's Buzzard oilfield and Iraq's wish to be exempted from OPEC production cuts. Brent LCOc1 was down 9 cents at $51.37 a barrel, while U.S. crude CLc1 also lost 2 cents to $50.50. But going the other way were metals with zinc shining and Chinese iron ore futures reaching their highest since August 2014. Coal prices also reached new peaks after weeks of gains, a prop for the Australian dollar AUD=D4as the two commodities are the country's biggest export earners. Another mover was the Canadian dollar which rebounded from a seven-month low after Bank of Canada Governor Stephen Poloz said the decision on whether to cut interest rates again was not one to take lightly. The comments countered recent speculation about an imminent easing and nudged the U.S. dollar down to C$1.3333 CAD=D4 from a peak at C$1.3398. –Reuters