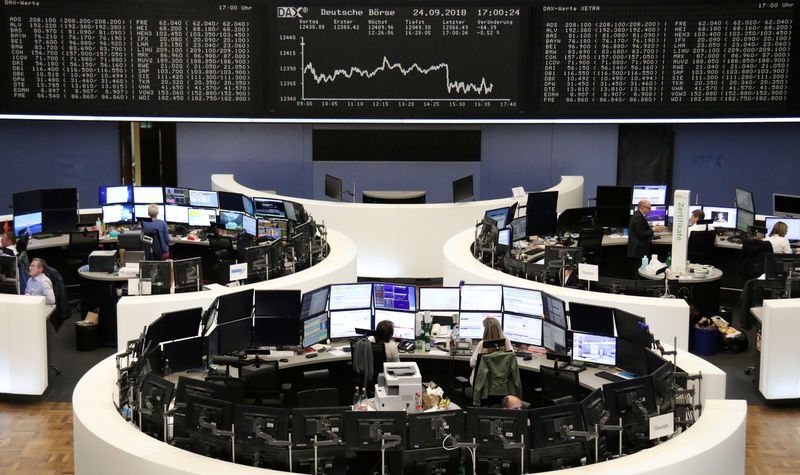 NEW YORK (Reuters) - Major world stock markets sank for a second straight day after strong US jobs numbers signaled a continued tightening of the labor market and increased inflation pressures, while Treasury yields rose again to multi-year highs. The increase in US non-farm payrolls slowed in September, likely from Hurricane Florence’s impact on restaurant and retail payrolls, but the Labor Department report also showed a rise in wages that could keep the Federal Reserve on track for more interest rate hikes. “The jobs report has become a inflation report,” said Russell Price, senior economist at Ameriprise Financial Services Inc in Troy, Michigan. The Dow Jones Industrial Average fell 180.43 points, or 0.68 percent, to 26,447.05, the S&P 500 lost 16.04 points, or 0.55 percent, to 2,885.57. The Nasdaq Composite dropped 91.06 points, or 1.16 percent, to 7,788.45, marking its first weekly percentage decline since march. The pan-European FTSEurofirst 300 index lost 0.86 percent and MSCI’s gauge of stocks across the globe shed 0.67 percent. A steep sell-off in US Treasury bonds that started midweek and pushed 10-year yields to seven-year highs has weighed on stocks and rippled through bond markets globally. “This week has been a bit of a bloodbath on the fixed income side of things,” said Dean Popplewell, chief currency strategist at Oanda in Toronto. “I think the market moves in the bonds this week side-swiped a lot of individuals.” The 30-year Treasury bond reached a four-year high of 3.424 percent, up 7 basis points from late Thursday. The benchmark 10-year yield rose to 3.248 percent, up 5.3 basis points from late Thursday. The US bond market will be closed on Monday for the Columbus Day holiday, but stock markets will open. In the currency market, the US dollar weakened in choppy trading. The dollar index fell 0.1 percent The euro was up 0.02 percent to $1.1515. The Japanese yen strengthened 0.17 percent versus the greenback at 113.73 per dollar, while Sterling was last trading at $1.3114, up 0.74 percent on the day. Fears about Italy’s finances pushed Milan stocks down 1.3 percent, while London’s FTSE, Frankfurt’s DAX and the CAC in Paris were off 0.95 to 1.4 percent. In oil, crude futures steadied after climbing to four-year highs earlier this week, and both benchmarks marked weekly gains ahead of US sanctions on Iranian oil exports. US crude futures settled at $74.34 per barrel, up 0.001 percent, and Brent settled at $84.16, down 0.50 percent for the day. At around four-year highs, oil prices have triggered concerns about demand as US President Donald Trump has blamed the Organization of the Petroleum Exporting Countries for rising gasoline prices for American consumers. Prices have eased slightly after Saudi Arabia and Russia said they would raise output to at least partly make up for expected disruptions from Iran, OPEC’s third-largest producer, due to the US sanctions that take effect on Nov. 4. The combination of rising oil prices, borrowing costs and a climbing US dollar have also been rocking emerging markets, which tend to be vulnerable to all three. Emerging market stocks lost 0.98 percent, closing at a 17-month low.