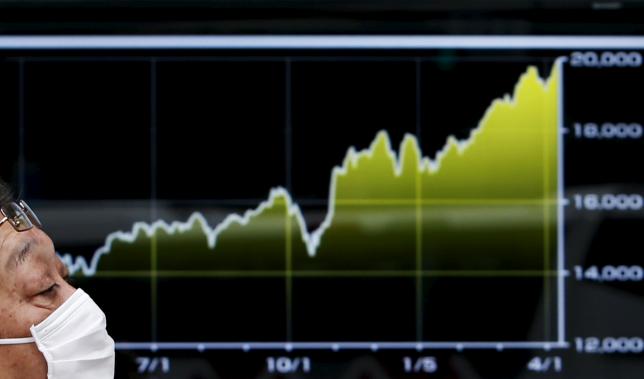 TOKYO - Asian stocks were firm on Tuesday after China's latest step to prop up its faltering economy lifted global equities, while the euro was pressured on growing worries a cash-strapped Greece may default on its debt. MSCI's broadest index of Asia-Pacific shares outside Japan .MIAPJ0000PUS was up 0.3 percent. It was led by a 1.5 percent rise in Hong Kong's Hang Seng index .HSCE, which had been on a 3-week roll driven by Chinese portfolio investments. Japan's Nikkei .N225 added a percent, while Australian shares rose 0.6 percent .AXJO. Following Europe's solid performance on Monday, financial spreadbetters expect Britain's FTSE 100 .FTSE to open around 0.1 percent lower and France's CAC 40 .FCHI down 0.2 percent, while Germany's DAX .GDAXI was seen opening up 0.1 percent. China's central bank on Sunday cut the amount of cash banks must hold as reserves in its latest attempt to spur lending and combat a slowing economy. The news followed reports last week about a crackdown on margin lending there, which had sent global equity markets lower on Friday. "China's action undid the damage caused by the crackdown (on speculative buying in Chinese stocks on Friday)," said Hirokazu Kabeya, chief global strategist at Daiwa Securities. "Chinese authorities seem to be worried that the stock markets are rallying despite weak economic fundamentals... There could be more stimulus down the road." News that the People's Bank of China will inject billions of dollars of capital into China Development Bank CHDB.UL and the Export-Import Bank of China EXIMC.UL to support the government's overseas development plans also shored up sentiment. The China stimulus drive, coupled with strong US corporate earnings, helped to lift European and US shares on Monday. The S&P 500 index .SPX rose 0.9 percent. Investors are however likely to be cautious about chasing shares higher while there is continued uncertainty over Greece's acute funding problems and fears it might have to exit the euro single currency. Even after several rounds of negotiations, market participants are not hopeful Greece will be able to present detailed plans that would satisfy euro zone finance ministers to continue their financial support at their meeting on Friday. That means Greece could be running out of cash by the end of this month. On Monday Greece ordered state entities to park idle cash at the central bank in a scramble to pay its bills ahead of civil services salary payments at the end of April and IMF loan payments early May. While an unprecedented debt default in the currency bloc could open the way for Greece to exit the euro, ECB Vice President Vitor Constancio said on Monday that a country that defaults would not have to leave the euro. The euro traded at $1.0720 EUR=, off Friday's peak of $1.0849. The dollar .DXY was steady after having rallied on Monday, trading at 97.95 against a basket of currencies. The Australian dollar AUD=D4 fell to $0.7685, from $0.7723 early, pulling away from a near one-month peak of $0.7844 on Monday after the release of the minutes of the Reserve Bank of Australia's (RBA) April policy meeting, even though they largely repeated the RBA's easing bias. Oil prices held near their four-month high hit last week, as a report of strong US consumption and a warning from Saudi Arabia's Interior Ministry about possible attacks on energy installations there offset earlier comments indicating Saudi production would stay near record levels in April. [O/R] US crude futures CLc1 stood at $56.34 per barrel, not far from a four-month high of $57.42 hit on Thursday. - Reuters