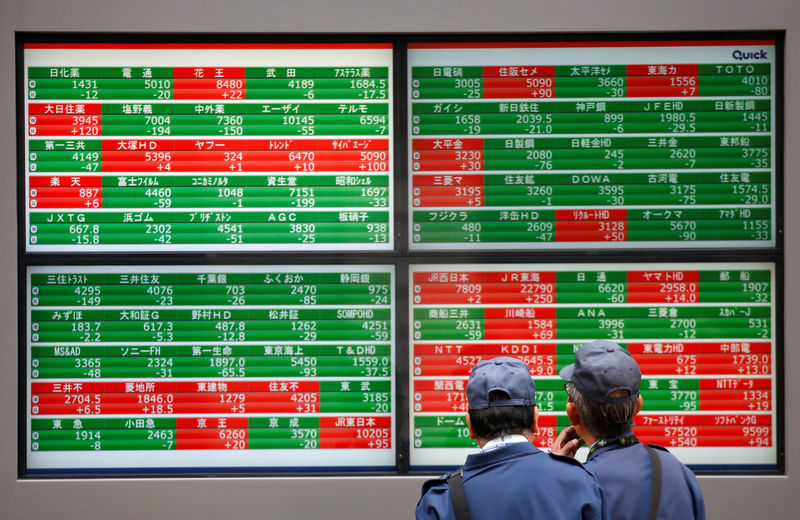 SYDNEY (Reuters) - Asian stock markets rallied on Wednesday as U.S. President Donald trump sounded upbeat about a trade deal with China, while sterling struggled with the risk of an imminent party coup against British Prime Minister Theresa May. In an interview with Reuters, Trump said talks were taking place with Beijing by phone and he would not raise tariffs on Chinese imports until he was sure about a deal. Trump also said he would intervene in the Justice Department’s case against a top executive at China’s Huawei Technologies [HWT.UL] if it would serve national security interests or help close a trade deal. A Canadian court on Tuesday granted bail to the executive in a move that could help placate Chinese officials angered by her arrest. The news was enough to prompt a bounce after days of losses and MSCI’s broadest index of Asia-Pacific shares outside Japan .MIAPJ0000PUS advanced 1 percent. Japan's Nikkei .N225 rose 1.9 percent and Shanghai blue chips .CSI300 0.4 percent. E-Mini futures for the S&P 500 ECc1 put on 0.4 percent after a mixed finish on Wall Street. Having been repeatedly disappointed before, analysts were careful to not get too optimistic. “From the Huawei case, it is increasingly obvious that the China-US trade war is about the exchange of technology, and the development of advanced technologies by Chinese companies,” said analysts at ING in a note. “The truce will not address these issues. And therefore tension between China and U.S. will continue.” Sentiment had got a lift on Tuesday from reports China was considering cutting import tariffs on American-made cars to 15 percent from the current 40 percent. Yet there were also reports the U.S. would release evidence this week detailing Chinese hacking and economic espionage. “Even if this (auto) step is taken it just removes what was a retaliatory measure to begin with,” noted ANZ economist David Plank. “Whatever the case, market price action is somewhat of a chop-fest, right now, as it swings around on each new headline.” Markets had also been jolted when Trump threatened to shut down the government over funding for a wall he has promised to build on the southern border with Mexico.

In currency markets, sterling was pinned near 20-month lows amid reports Conservative lawmakers could vote on a no confidence motion in May’s leadership as soon as Wednesday night. The political ructions come a day after her decision to delay a vote in parliament on her Brexit deal for fear of a rout angered many in her party. The risk kept the pound at $1.2515 GBP=D3, having shed 1.9 percent in the previous two sessions to a trough of $1.2483. The euro held firm at 90.56 pence EURGBP=, and regained a little ground on the dollar to $1.1333 EUR=. The dollar was still being viewed as the best of a bad bunch and stayed at 97.380 on a basket of currencies .DXY. “The market is concerned that May could be replaced by a Brexit-supporter, increasing the chance of a no-deal scenario,” said Rodrigo Catril, a senior FX strategist at NAB. “Bottom line: there is great uncertainty about whether Theresa May can survive as PM and what the prospects are for a general election, new referendum or a hard Brexit.” Investors were also looking ahead to the U.S consumer price report later on Wednesday where an expected slowdown in headline inflation would only reinforce speculation of fewer rate hikes from the Federal Reserve. While market still expect the Fed will tighten at its policy meeting next week, Trump said the central bank would be “foolish” to do so. Wagers on a more restrained Fed helped gold stay near a five-month peak around $1,245.61 XAU= an ounce. Oil bounced after industry data showed a surprisingly large draw on stockpiles and amid talk a recent OPEC-led supply cut could support prices in 2019. [O/R] Brent futures LCOc1 added another 62 cents to $60.82, while U.S. crude CLc1 rose 58 cents to $52.23 a barrel.