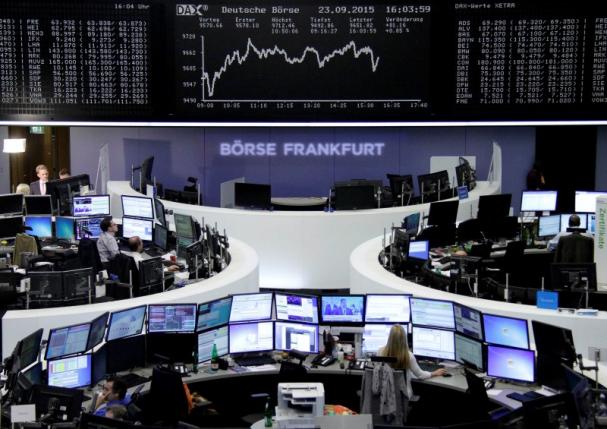 LONDON – World shares fell for the fifth day running on Thursday, sliding back towards two-year lows on growing unease about global growth, while emerging markets continued to gnaw at investor confidence. A 2.2 percent tumble for Tokyo's Nikkei as Japan returned from an extended break set the tone in Asia, while some encouraging German and French data and a 6 percent bounce in Volkswagen shares helped Europe's FTSEurofirst claw back into positive territory after a shaky start. Confidence in France's industrial sector hit its highest since July 2011 while business confidence in Germany rose despite the recent signs of weakness in China, one of its big export partners. The euro was also still on the rise after European Central Bank chief Mario Draghi on Wednesday appeared to suggest the bank wasn't as close to expanding its money printing program as had been thought. US Federal Reserve head Janet Yellen is due to speak later. While there are worries that a tightening in U.S. monetary policy could slow global growth, investors are also starting to wonder whether not raising rates could be even more concerning. "I'm really convinced that what we are seeing at the moment is the epitome of the QE (quantitative easing) trap," said Didier St Georges, a member of the investment committee at fund giant Carmignac. "QE is not good news for financial market assets anymore." Back in the currency market, the dollar was starting to find some traction again as the market mood appeared to be turning more positive in Europe. Commodity markets were also enjoying some relief after a frenetic few weeks. Oil prices bounced back after a 2.7 percent fall overnight on an unexpectedly large buildup in U.S. gasoline stocks. Brent futures were up 0.7 percent to $48 per barrel with U.S. crude futures up 0.9 percent at $44.90. Platinum, used in catalytic converters to clean up exhaust emissions, also rebounded having slid to its lowest level in more than 6-1/2 years on fears that the VW scandal over rigged emissions tests could reduce demand from the auto sector. It last stood at $944.00 per ounce, having fallen to as low as $924.50. EMERGING MARKETS STRUGGLE Overnight in Asia the mood had remained gloomy. MSCI's broadest index of Asia-Pacific shares outside Japan lost 0.2 percent adding to their biggest single-day fall in almost a month the previous day. Wobbly Shanghai shares trimmed a chunk of their early gains to end up roughly 0.6 percent, while Hong Kong's Hang Seng shed 1 percent and stocks in Indonesia slumped more than 2 percent. Emerging market currencies remained under fire too. The Brazilian real sank to an all-time low of 4.179 per dollar, clobbered by a recession, fiscal deficit and political instability following corruption allegations against leading politicians in the world's seventh-largest economy. The Australian dollar, often used as a proxy for China-related trades, struggled near a two-week low of $0.6989. Wall Street was expected to see a steady start later, but had also lost ground on Wednesday, dragged down by economic reports portraying US factory growth as tepid and China in its worst manufacturing contraction since the global financial crisis. "Investors will be cautious for the time being. Markets will become steadier only when uncertainties over the Chinese economy and US monetary policy diminish," said Masahiro Ichikawa, senior strategist at Sumitomo Mitsui Asset Management. –Reuters