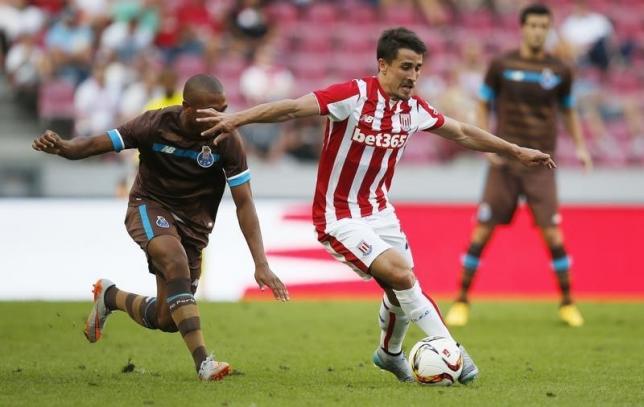 LONDON - Stoke City duo Bojan Krkic and Peter Odemwingie will not make the trip to North London to face Tottenham Hotspur on Saturday, manager Mark Hughes has said. Nigeria international Odemwingie, who came off the bench against Liverpool in Stoke's Premier League opener on Sunday, is likely to miss the next couple of weeks after injuring his hamstring. "It's disappointing for him because he has worked tremendously hard throughout preseason," former Manchester City manager Hughes said at the pre-match press conference. Former Barcelona forward Bojan will play in an under-21 fixture against Wolves on Saturday morning to build up his fitness levels, as he continues his rehabilitation from a long-term knee injury. "He won't travel with the first team on Saturday, but he is incredibly close to being fit and available," Hughes said. "We feel he is better served getting game time rather than sitting on the bench." However, Marko Arnautovic and Marc Wilson are likely to make the squad for the match against Spurs, after missing the Liverpool game. "Marko has trained this week and we don't think he will have any real reaction to that, but we will check him out again before we travel," Hughes added. "Marc Wilson has been able to train as well, which is a positive for us, but we have to be careful with him because he has some bruising on his ankle bone which could hinder him. "They aren't easy things to deal with and to get over but he has shown a lot of determination to come back from it, so he is hopefully going to be available too." -Reuters