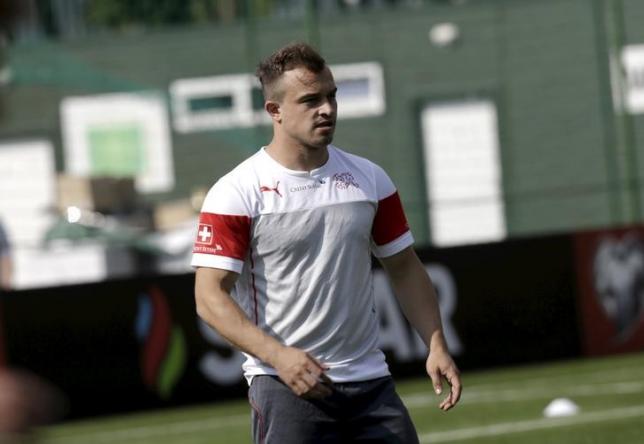 STOKE - Swiss international Xherdan Shaqiri, who joined Stoke City for a club record fee this week, said he is fully fit and ready to make his Premier League debut against Tottenham Hotspur this weekend if manager Mark Hughes gave him the nod. Shaqiri signed a five-term deal at the Britannia Stadium on Tuesday after the Potters agreed a 12 million pounds fee with Serie A giants Inter Milan. "I can't wait to play my first game here because I am feeling really fit," the 23-year-old, who has also played for Bayern Munich, told the club's website. "I have done a lot of good quality work throughout the summer with my last team so I am feeling good and strong. "The coach will make the final decision though, but first of all I need to meet my new teammates and work with them in training. I can't wait to play and score goals for this club." Hughes said Shaqiri is "flying" fit, but would not be drawn on whether his star signing would feature at the weekend. Shaqiri, who was part of the Bayern Munich squad that won the Champions League in 2013-14, said Stoke could improve on last season's ninth place finish -- the club's best-ever end to a Premier League campaign. "I was at the game (against Liverpool) on Sunday, as you know, and I really enjoyed the game -- it was good. Yes, Stoke lost the game in the end, but I saw things that really encouraged me," he said. "I am sure that we will continue to play good football and win many games, and who knows maybe we can finish in a higher position than last season. The potential is absolutely huge here." -Reuters