ISLAMABAD (92 News) – Foreign Minister (FM) Shah Mehmood Qureshi on Friday urged India to refrain from hurling baseless accusations against Pakistan. Responding to the Indian allegations over yesterday’s suicide attack in Occupied Kashmir, FM Qureshi said that since day one we have been desirous of good relations with all our neighbours, including India. The minister said India should also refrain from leveling unfounded allegations against Pakistan. 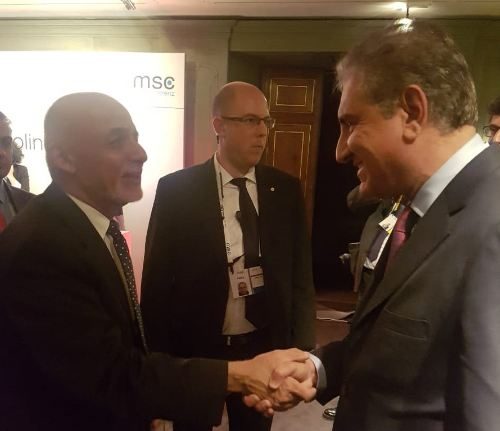 Shah Mahmood Qureshi met Afghan President Dr Ashraf Ghani on the sidelines of international security conference in Munich today. Both the leaders are participating in the special session pertaining to Afghan peace process. In an interview with a German newspaper in Munich on Friday, Foreign Minister Shah Mehmood Qureshi has said Pakistan has always been in favour of dialogue with Afghan Taliban regarding peace in Afghanistan, which is imperative for development and progress of entire region. He said Islamabad has played its due role in the Afghan peace process and will do so in future.  He said today Pakistan's stance regarding peace in Afghanistan is being vindicated. 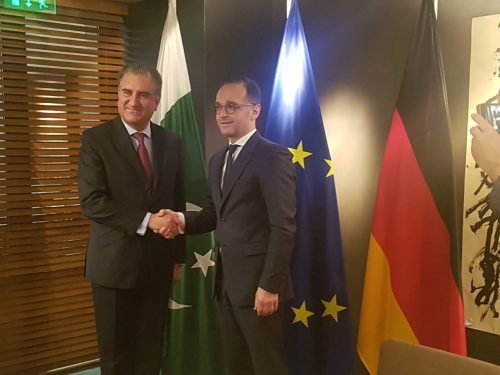 Talking to his German Counterpart Heiko Maas on the sidelines of international security conference in Munich today, FM Qureshi has said Germany can take advantage of positive investment policies of Pakistan in the fields of energy, infrastructure, agriculture, food processing, water and waste management. He said investment of leading German car company Volkswagen in Pakistani market is a good omen for business in Pakistan. Both the Foreign Ministers agreed to turn Pak-German bilateral friendly relations into durable multi dimensional partnership. Shah Mehmood Qureshi informed his counterpart about Pakistan's efforts for peace in Afghanistan. German Foreign Minister showed interest to visit Pakistan in next month.

A day earlier, FM left for Munich, Germany to represent Pakistan in the Global Security Conference. The conference will be attended by Defence and Foreign ministers and security experts from across the world. Talking to the media before his departure, Shah Mehmood Qureshi said that Pak-US relations are at a key juncture. “The world is acknowledging Pakistan’s efforts for peace.” Shah Mahmood Qureshi said that Pakistan had always supported peace efforts to bring stability to Afghanistan. He said Pakistan’s role vis-a-vis peace in Afghanistan is now being appreciated. The foreign minister will hold meetings with Afghan President Ashraf Ghani and other world leaders to bring peace in the war-torn country. Shah Mehmood Qureshi, during his stay in Germany, will meet his counterparts of various countries, including Russia, Germany, Uzbekistan and Canada and will also interact with key US congressmen and members of the Senate.