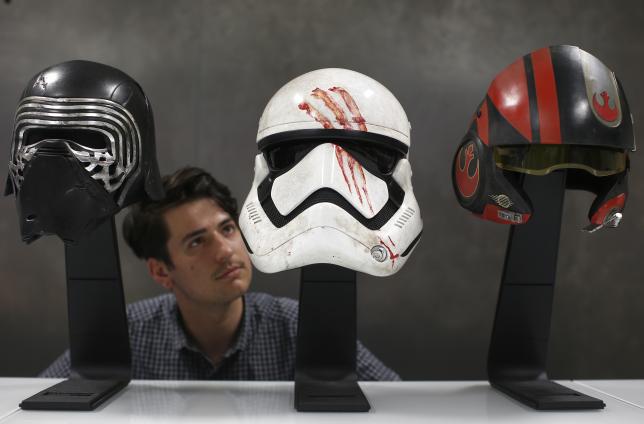 LONDON – From Darth Vader's melted helmet to Rey's lightsaber hilt, "Star Wars" fans can now get their hands on replicas of the props used in the sci-fi franchise's last movie. Disney and Lucasfilm have launched the line of made-to-order precisely detailed items seen in "Star Wars: The Force Awakens", created by the Propshop team that helped design and make the props for the film at Britain's Pinewood Studios. "We're based in Pinewood Studios where 'Star Wars' is actually filmed and we've created for the first time a pipeline to be able to manufacture these products and make them available to the consumer," Propshop director James Enright told Reuters. "They're unique because they actually come from the studio itself...They're made by artists and film technicians who do this every day, who are very passionate about what they do." To ensure the items accurately match the props seen in the film, Propshop uses digital data collected during the making of the movie and combines it with 3D printing technology. Once the item is built, the final bits of paint are added and rubbing down is done to complete the replica. "Star Wars Collectibles: Ultimate Studio Edition" features eight prop replicas, also including Finn's bloodied Stormtrooper helmet and Chewbacca's bowcaster, with prices ranging from $1,250 to $3,500. –Reuters