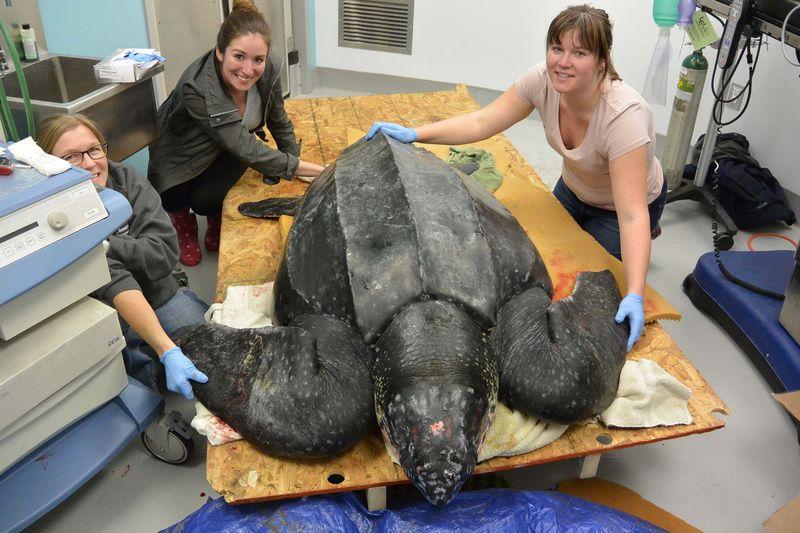 CHARLESTON, S.C. - An endangered 500-pound (230-kg) leatherback sea turtle was being treated at a South Carolina aquarium on Monday after wildlife officials made a rare rescue of the reptile found alive and stranded on a remote beach. It is the first living leatherback turtle to be recovered in South Carolina and one of only a handful ever treated at rehabilitation facilities in the United States, said Jenna Cormany, a wildlife biologist with the state's Department of Natural Resources. "I can hardly believe it. They don't strand alive very often," said Kelly Thorvalson, manager of the Sea Turtle Rescue Program at the South Carolina Aquarium in Charleston. State wildlife officials spotted the animal on Saturday on the beach on Yawkey-South Island Reserve, a 3.5-mile-long (5.6-km-long) barrier island and wildlife preserve near Georgetown, South Carolina. It took five people nearly four hours to retrieve the turtle from the beach, and the animal was then driven an hour and a half south to Charleston, Cormany said. "It was logistically difficult," she said. "We had a turtle stretcher on a board and we all did our best to lift it. It was very lethargic and sick looking." Leatherbacks, the largest turtle in the world and the only sea turtles without a hard shell, can weigh up to 2,000 pounds as adults, according to the National Oceanic and Atmospheric Administration. Wildlife officials think the turtle they found is a young female that may have eaten debris, shell or a plastic bag mistaken for a jellyfish. The animal, named Yawkey by the aquarium's staff in a nod to the island where it was found, is being treated for a possible intestinal blockage. It is improving after having its low blood sugar corrected with fluids, Thorvalson said. Leatherbacks do poorly in captivity, she said, so the rescued turtle will be released after receiving treatment for a few days. - Reuters