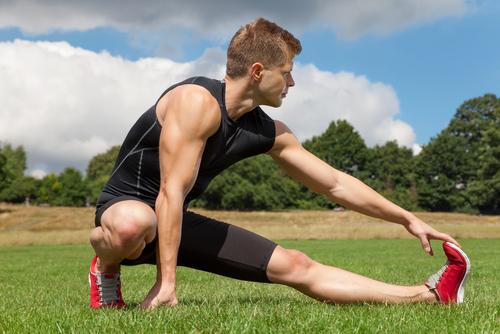 SEATTLE - Tendon injuries are common in sports, and there are many schools of thought on how to avoid them. But a new analysis of past research finds that stretching doesn’t help and might even raise the risk of injury for some. Shock absorbing insoles, and hormone replacement therapy for postmenopausal women, on the other hand, did offer protection for some, the researchers found. "Stretching is often viewed as an empirically accepted method to prevent sports injuries, including tendinopathy," write the authors, led by Janne A. Peters from the University Medical Center Groningen in the Netherlands. "However, there is no scientific evidence that confirms this," they point out in Journal of Science and Medicine in Sport. Tendons are thick cords that connect muscles to the bones. When they become irritated or inflamed, that is known as tendinitis. Tendinosis, on the other hand, is when tiny tears occur in and near the tissue of the tendon. Most experts use "tendinopathy" to describe both inflammation and tears in tendons. The condition can occur in all parts of the body, often around joints, including the ankle, knee, hip, groin, shoulder and elbow. It can be very painful, the authors note, and the chances of recurrence are high, so it often becomes a chronic condition. "These are injuries that affect not just elite athletes but also adults who like to exercise, and they tend to be overuse issues," said Dr. David Geier, an orthopedic surgeon and former director of sports medicine at the Medical University of South Carolina, who was not involved with the study. "Achilles tendinopathy often affects running athletes, while patellar or knee joint tendinopathy often bothers people who play repetitive jumping sports like basketball," he told Reuters Health in an email. For athletes in particular, the consequences of having this type of chronic injury can affect their career, as well as quality of life, he said. Therefore, it is important to try to prevent injuries in the first place. Peters and her colleagues examined 10 articles that studied methods of preventing tendinopathy. Of these, three found benefits from specific interventions in preventing injuries to the Achilles tendon, which connects the heel bones to the calf muscles. One study linked a specific program including soccer-specific balance training to fewer injuries. A second study showed that using shock absorbing insoles was also helpful, while the third found that hormone replacement therapy seemed to lower risk for "structural Achilles tendon changes" in women. There was no evidence that stretching was beneficial but some that it might increase the risk of injury in people who already had problems with their knees or the patellar tendon. This was also true for so-called eccentric training, a method of doing muscle contractions. "While I do think that there may be some role for hormone replacement therapy or shoe inserts for active individuals in a preventative or treatment sense for these problems, someone who is interested in pursuing one of these treatments should consider speaking to an orthopaedic surgeon or to his or her doctor," Geier said. "For instance, people have different anatomy of their feet, such as high arches or flat feet, and might benefit from shoe inserts or orthotics, while others might not." He noted that physicians often see patients with these problems who have been in pain for many months. "Often, if they had taken steps when they started having soreness along the patella tendon or Achilles tendon, such as taking a few days off or seeing a doctor or physical therapist, they could have limited the issue before became a much larger and more challenging problem," Geier said. - Reuters