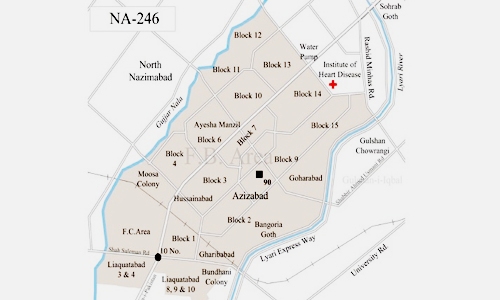 KARACHI (92 News) – Polling started early Thursday morning in the NA-246 constituency amid tight security arrangements under the Sindh Rangers. A large number of men and comparatively smaller number of women reached the polling stations early in the morning to cast their votes. Around 350,000 registered voters will practice their right to vote in the constituency today. Three political parties’ candidates; the Jamaat-e-Islami’s (JI) Rashid Naseem, the Muttahida Qaumi Movement’s (MQM) Qamar Naveed and the Pakistan Tehreek-e-Insaf’s (PTI) Imran Ismail are running for the seat that was vacated after Nabil Gabol – the elected MNA from the constituency in General Election of 2013 - resigned from the MQM in February. The Sindh Rangers finalized the security plan last night, also banning pillion riding in the city till tomorrow (Friday). FACE-OFFS & SLOGAN-CHANTING: Early on the voting day, the Pakistan Tehreek-e-Insaf (PTI) and Pasbaan workers came face to face chanting slogans against each other. Meanwhile in Liaqatabad, maladministration halted the voting process and the voters were sent out from the polling station. Also, the PTI polling agent present was also sent off after he was unable to produce his NIC. PARTY-HEAD STATEMENTS: The MQM chief Altaf Hussain in statement said that his party was the only voice of the Karachites whenever they were subjected to injustice. Meanwhile, MQM candidate for the NA-246 seat Qamar Naveed has said that today, the bare truth shall be revealed to the public. “No one can steal the MQM’s mandate despite all their efforts,” he said. On the other hand, PTI chief Imran Khan said that the time is ripe for change in Karachi. “I call on the people of Karachi to choose wisely,” he said.