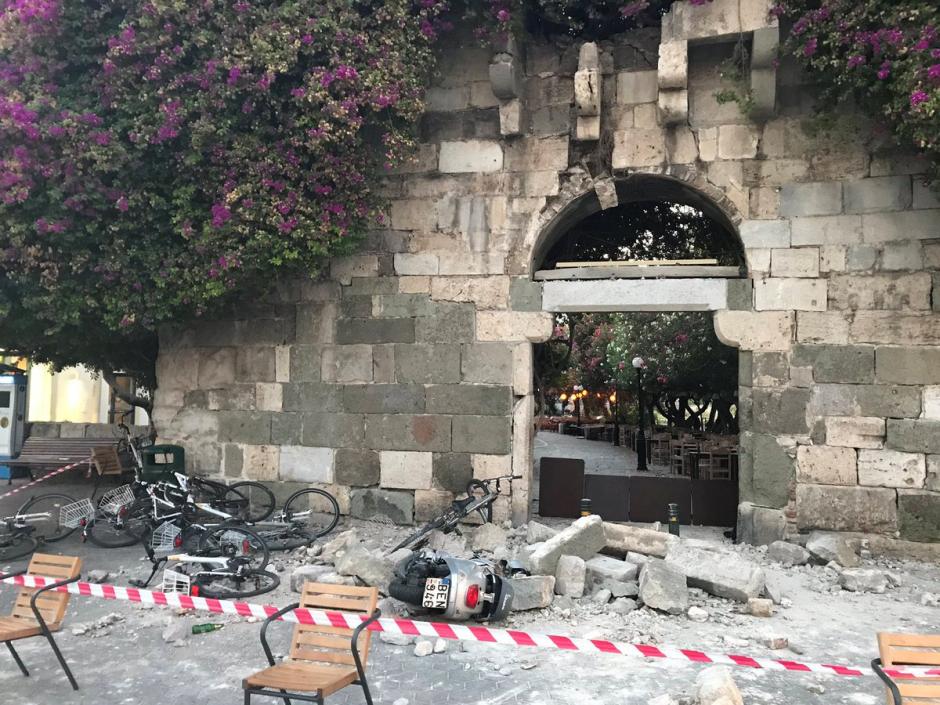 ANKARA/KOS, Greece (Reuters) - A powerful earthquake killed two people on the Greek holiday island of Kos in the early hours of Friday, also causing disruption in the Turkish tourist hub of Bodrum.

A Turkish and a Swedish tourist, aged 39 and 22 years, died when the roof of a popular bar collapsed, Greek police said. Kos's port was put out of action and, across the strait in Bodrum, a small tsunami damaged vehicles parked near the shore.

Around 200 people were injured, including tourists of various nationalities. Many of Kos's tourists spent the night in the open as a precaution, hotel owners said.

The U.S. Geological Survey put the quake at magnitude 6.7 and located the epicenter 10 km (6 miles) SSE of the Turkish summer tourist hub of Bodrum, and about 16 km ENE of Kos's main port.

Data from Turkey's disaster and emergency management authority, AFAD, which put the quake at magnitude 6.3, showed that more than 40 aftershocks were felt in Turkey and Greece, in the immediate aftermath of the quake, with some up to magnitude 4.6.

Hotel owners there told Turkish broadcasters that some tourists were checking out.

"It was a lucky escape and it could have been much worse," said Issa Kamara, a 38-year old personal trainer at the Maca Kizi hotel in Bodrum's smart Turkbuku area.

Constantina Svynou, head of the hoteliers' association in Kos, told Greek ERT television that many visitors had spent the night outside their hotels, but some were now returning to their rooms.

"There are about 200,000 tourists on the island, we are at the peak season. Our first reaction was to calm the tourists, following basic rules and evacuating hotel buildings," Svynou said, adding that there had been no injuries at the hotel.

A hospital official in Kos said 100 people had been hurt but that most had only slight injuries.

Video footage showed long, wide cracks in the asphalt on the quayside at the port of Kos, which is near a tourist strip of cafes and bars.

Kos's airport remained operational and Greek Deputy Shipping Minister Nektarios Santorinios flew there. But he said the port was out of action.

"Passengers on ferries have been rerouted to the islands of Nisyros and Kalymnos," he told Greek SKAI TV.

Police said most of the damage in Kos had been to older buildings. The Kostoday.com website showed parts of the tourist strip flooded, and a small fishing boat stranded on a road.

A seismologist told Greek TV that there had been a tidal wave about 70 cm (28 inches) high.

Turkey's emergency authorities warned against aftershocks, but said there had been no casualties or major damage there, although some power cuts were reported.

The broadcaster CNN Turk said that, in Bodrum, 60 vehicles had been dragged along by the water. It also showed boats listing in a harbor. Several store owners told the broadcaster NTV they had suffered flood damage.

Television footage from the area showed hundreds of people abandoning buildings and waiting on the streets, as cars shook and items fell off store shelves.

Turkey's location between the Arabian tectonic plate and the Eurasian plate renders it prone to earthquakes.

In October 2011, more than 600 people died in the eastern province of Van following a 7.2-magnitude quake and powerful aftershocks. In 1999, two massive earthquakes killed about 20,000 people in Turkey's densely populated northwest.

The same year, a 5.9 magnitude quake killed 143 people in Greece.