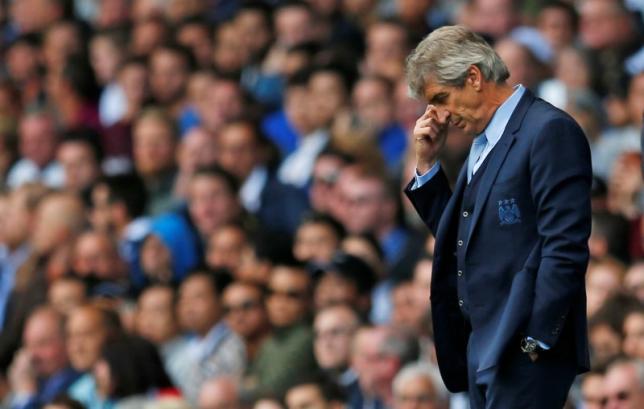 BERLIN - Manchester City already have their backs to the wall when they travel to Borussia Moenchengladbach on Wednesday, with injuries piling up and a losing start to the competition threatening to derail their Champions League campaign. After starting the English Premier League season with five consecutive wins, a jolting home defeat by Juventus in their Champions League opener was followed by consecutive beatings by West Ham United and Tottenham Hotspur. Saturday's 4-1 defeat by Tottenham also saw midfield powerhouse Yaya Toure suffer a hamstring injury, while keeper Joe Hart missed that game with an injury and both are doubts for the clash in the Rhineland. With pressure mounting to stay in the running for a top-two finish in Group D, City's coach Manuel Pellegrini is also likely to be without captain Vincent Kompany who is nursing a calf problem. "Joe had a problem with his back during the week," Pellegrini said. "Yaya had some problem with his hamstring, and we don't know (if they will be fit). We must wait..to decide if they are 100 percent." With Moenchengladbach hosting their first game in Europe's premier club competition for 37 years, the atmosphere at the Borussia-Park will be daunting for City who badly need a three points to bolster their chances of getting beyond the last 16 of the Champions League for the first time. Chilean Pellegrini, however, remains confident of City's chances. "The first season we beat Bayern Munich and lost against Real Madrid in the group stages and qualified with 15 points," Pellegrini said. "Last year was exactly the same." "This season we lost against Juventus here, but we played better than Juventus. We lost just three points. I'm absolutely confident we are going to do it because we did it the last two seasons after losing the first game." Gladbach are neither Real Madrid nor Bayern or Juve but the Germans are on a high after two consecutive wins following a terrible start to the season. In complete contrast to City they lost their opening five Bundesliga games, leading to the resignation of coach Lucien Favre, but interim coach Andre Schubert has since stopped the rot and they will be confident of their first Champions League points after an opening defeat against Sevilla. Schubert himself has ruled out a long-term commitment but the club's sport's director Max Eberl said: "Andre is doing a fantastic job." After a 3-1 defeat of Stuttgart at the weekend, midfielder Granit Xhaka identified the reason for the change in fortune. "The fun is back because we are playing the type of football that made us so strong in the past," Xhaka said. -Reuters