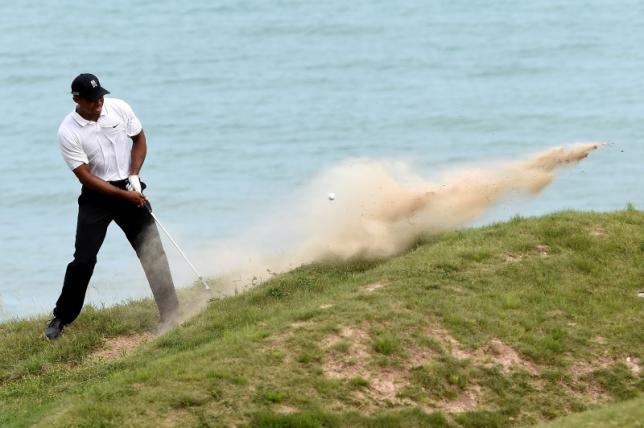 WISCONSIN - Tiger Woods plumbed new depths when he missed the cut in a third successive major for the first time in his career at the storm-delayed PGA Championship on Saturday. The former world number one, who failed to advance after 36 holes at the U.S. Open in June and at last month's British Open, exited the tournament after carding a one-over-par 73 in the second round at Whistling Straits. Woods had left himself with plenty to do after putting poorly on the way to an opening 75 and, despite improved play in the second round, he finished at four-over 148, two strokes outside the cutline. "I hit it good enough to be where I needed to be, but I putted awful," Woods, who totaled 28 putts in the second round after piling up 33 in the first, told reporters. "I finally figured something out today on the putting green, but the damage had already been done. Finally rolled the ball coming in, and unfortunately it was a too little too late." Asked what adjustment he had made to improve his putting on the beautifully manicured greens at Whistling Straits, the 39-year-old replied: "Just my set-up. My lines were off. "So I got my lines organized, and all of a sudden I was seeing my line again. And not only that but I felt like I could roll the ball on my correct pace." Still working through the latest swing change of his career after recovering from back surgery, Woods has endured a dismal 2015 campaign featuring four missed cuts, a withdrawal and just two top-25 finishes in 10 starts. With the 14-times major champion's world ranking having plummeted to a mind-boggling 278th, his PGA Tour season is nearly over as he is unlikely to qualify for the lucrative FedExCup playoffs. Woods in now considering playing in next week's Wyndham Championship in Greensboro, North Carolina -- the final event of the regular season on the U.S. circuit -- in a last-ditch bid for extra FedExCup points. "I'm just going to sit back and I'll go through with my team, we'll talk about it, what I need to do and see if that's the right move or not," said Woods, whose name was added to the Wyndham field before Friday's deadline. "We'll decide next couple days." Woods, who has suffered from wayward driving for most of this season and a shockingly bad short game earlier this year, posted his worst round as a professional, an 85 at the Memorial tournament in June. "I just haven't put together ball striking and putting," he said of his 2015 campaign. "It's been one or the other." - REUTERS