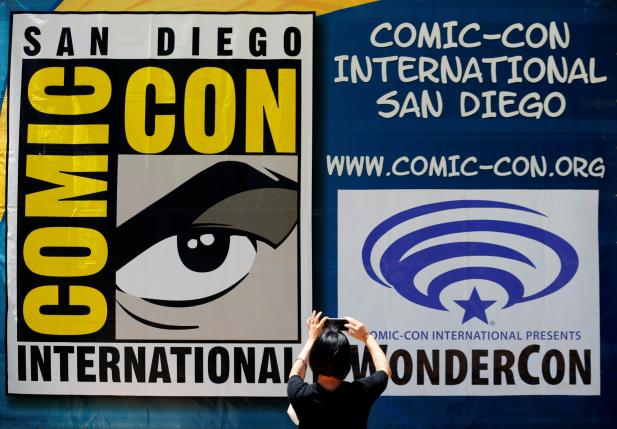 LOS ANGELES – A slew of superheroes, magic and King Arthur are just some of the bait that movie studios are using to entice fans at this year's San Diego Comic Convention as Warner Bros' DC Comics franchise goes head-to-head with Disney's Marvel universe. The four-day event, which has become an increasingly important tool for Hollywood to generate interest in upcoming movies, is due to kick off on Thursday. It will include panels and activities hosted by studios and television networks for the 100,000-plus audience comprising comic book, film and TV fans. Dreamworks' "Trolls," Oliver Stone's "Snowden" and sci-fi adventure "Valerian" are putting on celebrity panels, while Seth Rogen and Evan Goldberg are scheduled to host a screening party for their R-rated animated "Sausage Party." On Saturday, Warner Bros will showcase its upcoming films and Marvel will close out the day. Anthony Breznican, Entertainment Weekly senior writer, said in an interview that Warner Bros has some work to do after the criticism around March's "Batman V Superman: Dawn of Justice." "(Warner Bros) has to win over the people about the rest of this universe going forward," Breznican said. "Marvel just has to maintain, they have cruise control on, but of course that doesn't mean they can slow down." Disney, keeping its line-up under wraps, is expected to bring "Guardians of the Galaxy 2" and Benedict Cumberbatch's "Doctor Strange." Alongside "Wonder Woman", "Suicide Squad" and Guy Ritchie's new "King Arthur" film, Warner Bros is throwing in a dose of magic with "Fantastic Beasts and Where to Find Them," the first spin-off from the "Harry Potter" franchise. "To be in a room full of people who genuinely put so much of their time and attention into following what happens in these various worlds - whether it's Marvel or Potter - it's primarily why we make movies," said the film's director, David Yates. "Fantastic Beasts", due out in November, is set in the greater Potter world but features new characters. Fans will be shown a trailer with previously unseen footage. Yates, attending Comic-Con for the first time alongside cast members including Eddie Redmayne, said fans would also get to "participate in a moment of magic" with the cast. Charlie Hunnam, who plays the title role in "King Arthur," said he hoped the film would engage the convention's "well-versed" movie fans. "Nobody really knows what we're doing so there'll be a little more emphasis on education for what we've gone out to achieve," Hunnam said. –Reuters