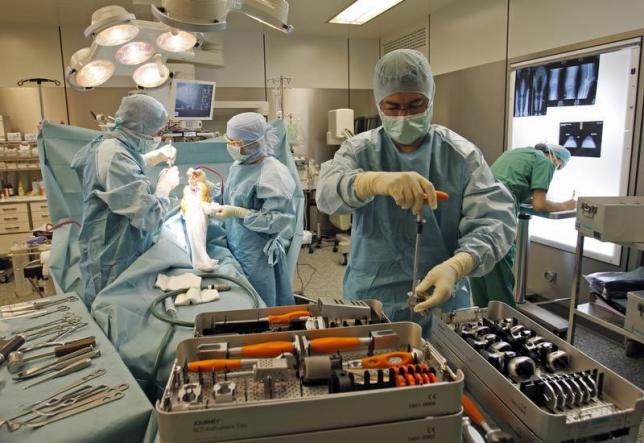 NEW YORK - The more procedures surgeons have performed, the better their patients’ outcomes, at least until the doctors hit a learning plateau, according to a new analysis of data on more than one million surgeries. The flattening out of the learning curve happens at different points - ranging from 25 to 750 procedures - for different types of surgery, the authors found. “For the past two decades or so, many researchers have acknowledged that a surgeon’s experience is related to his or her performance,” said coauthor Barnabas J. Gilbert of Harvard University in Cambridge, Massachusetts. But studies in the area have been inconsistent, so there have not been many practice guidelines based on the learning curve data, Gilbert said. “Our results are exciting and, we hope, will be used to shape the surgical training programs of the future,” he told Reuters Health by email. The authors analyzed the results of 57 recent studies of surgical performance, conducted in 14 countries with a total of more than 17,000 surgeons and 35 different procedure types. Most studies measured the volume of cases a surgeon handled, and some also included years of practice. In 44 studies, researchers found that the amount of time procedures took, rates of recurrence of the condition, complication rates, requirements for blood transfusions, mortality and stroke rates all improved as the surgeon’s number of past cases increased. “Of all the studies included in our review, only two showed the surgical learning curve 'leveling out', where increased experience failed to improve operative outcomes,” Gilbert said. “The time at which this plateau occurred was procedure-specific, taking approximately 12 years of experience in the case of bilateral reduction mammoplasty and somewhere between 5 and 20 years for thyroidectomies, for example.” A minority of studies found an insignificant learning curve, and one focusing on off-pump coronary artery bypass graft surgery found that factors like patient heart failure, renal failure, type of bypass and sex were more important predictors of outcome than surgeon experience, according to the results published in the Annals of Surgery. Performance may deteriorate toward the end of a surgeon’s career as well, Gilbert said. After 20 years of practice, surgeons removing the thyroid were more likely than others to cause recurrent laryngeal nerve palsy and hypoparathyroidism, which are serious complications, he said. “In the US, groups such as Healthgrades, RateMDs and Vitals run doctor-rating websites, which provide overall ratings of individual surgeons based on a combination of factors, including the number of patients treated in the last 12 months,” Gilbert said. But the ratings are based on online patient satisfaction reviews and attaining specific information on individual surgeon case volume is still difficult for patients, he said. In the UK, case volumes and outcomes of individual surgeons are published annually, which makes surgical care more transparent, he noted. “Patients have a right to know how good a surgeon or surgical team is, before deciding to undergo surgery,” said Dr. Fiona Godlee, editor in chief of the BMJ. “They should have access to data on outcomes from individual teams.” “Based on this new review of the evidence, these outcomes will be better for more experienced surgeons, although performance plateaus off after a while, which shows the need to keep the data up to date in order to keep surgeons on their toes,” said Godlee, who was not part of the new research. In general, surgeons with the most experience are likely to be found in large, specialist centers, in centralized hospitals, Gilbert said. “In addition to a surgeon’s experience at performing a specific procedure, patients may wish to find out more overt risk-related metrics such as estimated complication rates,” he said. “Patients may also wish to look at a range of quality measures at the hospital where surgery is being performed, such as whether there is a specialized unit or designated operating room for a particular type of procedure, as well as how many operations of that kind have been performed at the hospital.” Patients should also consider a surgeon’s communication skills and ability to build a trustworthy relationship, he said. - Reuters