Suarez delighted to run riot with Messi and Neymar again 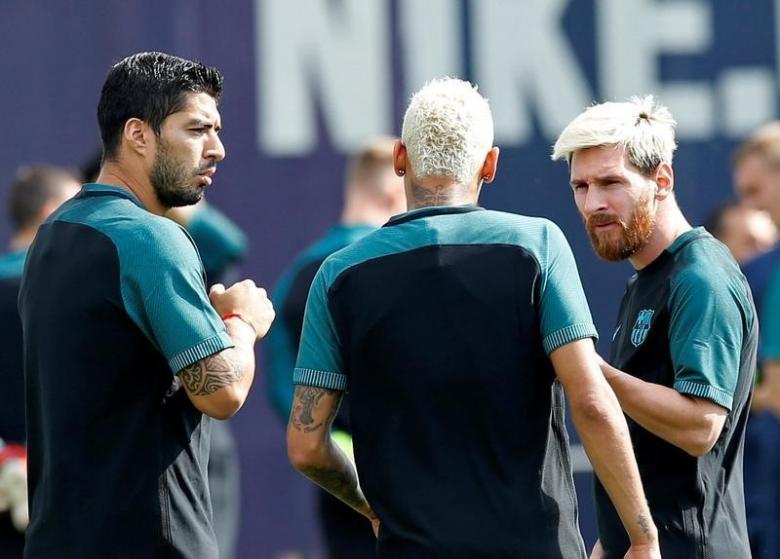 Suarez delighted to run riot with Messi and Neymar again

BARCELONA - Luis Suarez said he had missed linking up with his insatiable strike partners Neymar and Lionel Messi after Barcelona's 'MSN' attack scored six goals in their 7-0 record rout of Celtic. Messi scored a record sixth European Cup hat-trick while Neymar became the first player in Champions League history to provide four assists and score in a game, curling in the third from a free-kick. Uruguay international Suarez added the final two strikes to complete Barca's biggest ever European Cup win and Celtic's worst defeat in the competition. "It's ages since the three of us were able to play together from the off – we've missed that ability to enjoy ourselves," Suarez told reporters on Tuesday. Suarez and Messi started Saturday's shock defeat to Alaves on the bench, while Neymar missed the start of the season due to his participation in the Olympics, where he fired Brazil to a first ever Gold medal in soccer. The three South Americans lined up together against Celtic for the first time since last season's King's Cup final. As Neymar teed Messi up to smash home the opening goal after three minutes and laid on the pass for the Argentine's second strike later in the first half, however, there was no sign the feted trio had lost any of their almost telepathic understanding. "The summer break, the Olympics and then Neymar's holidays got in the way. Today we really enjoyed being back in tandem," added Suarez. Messi's hat-trick was his 40th professional treble in club and international football, while his sixth European Cup treble saw him move ahead of Real Madrid greats Alfredo di Stefano and Ferenc Puskas. Barca captain Andres Iniesta, who lashed home Barca's fourth on the volley following another precise cross from Neymar, also paid tribute to Barca's deadly trident. "They are the three players in the world who are the best in their position and one of them is unique," he said. "Leo just keeps proving that in football terms he's unique. As a team we play and work to make sure the three of them are happy, that they get chances. All we can hope is that they keep scoring like that." -Reuters