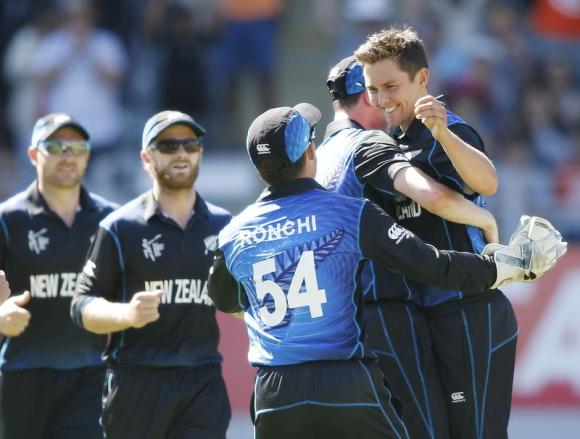 NAPIER - New Zealand's less-than-demanding fielding stints means they are able to play an unchanged side for the fifth successive game during the World Cup when they face Afghanistan in their penultimate Pool A clash at McLean Park on Sunday. New Zealand have won all four of their matches so far at the tournament to top the pool, but have not yet been required to bowl the full 50 overs in a game. Australia and England were dismissed in 32.2 and 33.2 overs respectively, while Scotland were bowled out in 36.2 overs. Only Sri Lanka, in the opening game, came close to batting the full complement before they were dismissed in 46.1 overs. "At this stage the nature of the games we have had haven't been overly taxing in terms of the physical demands on the bowlers," McCullum told reporters in Napier on Saturday. "Adam Milne, I may be wrong but I think he's bowled only 21 overs in the tournament so far. "So the way the game has unfolded has allowed us the luxury of being able to roll out the same team. "It gives them another good chance to get into their work and we think this is the best 11 for us at this time." The decision to keep faith with the same team will also allow New Zealand's batsmen some time in the middle, particularly as McCullum has already decided to bat on Sunday if he wins the toss. New Zealand have only batted first once, against Sri Lanka, where they batted out their full complement of overs. The success of the bowlers has also meant they have had small targets to chase, with the most being the 152 needed to beat Australia last Saturday at Eden Park. Since the opening game they have batted 24.5 overs against Scotland, 12.2 against England and 23.1 in the one-wicket win over Australia. "The fact that we've been able to have success bowling first has obviously meant that our batting hasn't been as challenged potentially as other teams in the competition," he added. "Obviously we have settled on our number one 11 at this point but I am confident that if injuries do come about in games to come then we have the experience and personnel on the sideline who can step up and perform the role given to them." –Reuters