Successful world championships no desert mirage in the end 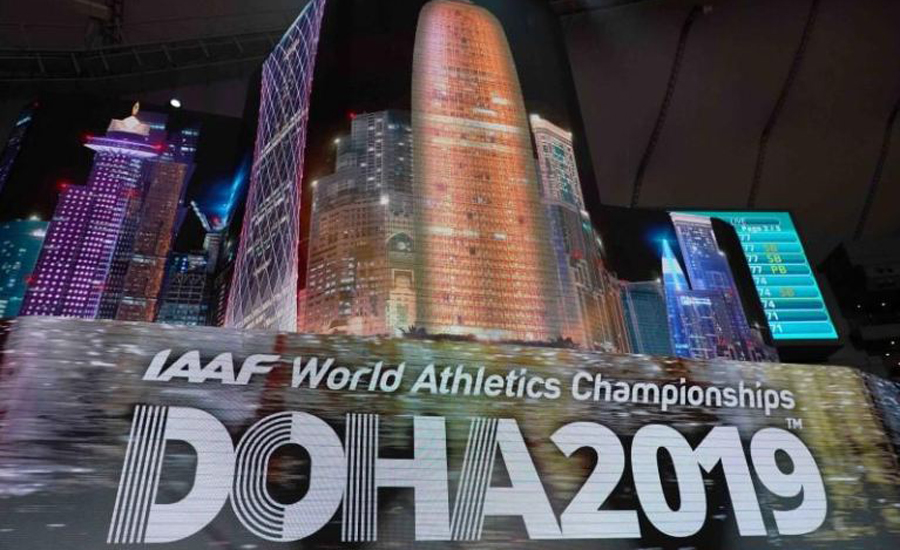 Successful world championships no desert mirage in the end

DOHA (Reuters) - A successful world athletics championships had looked like a desert mirage but the event eventually came to life with an oasis of thrills and packed houses to rescue Qatari organisers and officials before the curtain came down on Sunday. Struggling due to a lack of interest from locals, the 10-day showcase delivered on the final weekend as criticism over an empty stadium and stifling heat of around 38 degrees Celsius was replaced by an atmosphere at last worthy of a world event. The athletes responded with memorable performances in the air-conditioned Khalifa Stadium, with temperatures kept at 21 degrees, highlighted by local hero Mutaz Barshim on Friday soaring to victory in the men’s high jump for Qatar’s only gold. On the same night American Dalilah Muhammad broke her own world record to win the women’s 400 metres hurdles while the sport’s big men seized the spotlight on Saturday as the shot putters gave a show hailed as the greatest ever in the event. The United States again topped the medals table, their 14 golds almost triple the next best of Kenya on five while Jamaica and China each had three. No other nation got more than two. “It is pretty clear to us that on athlete performance this is the best world championships we have had,” said International Association of Athletics Federations (IAAF) chief Sebastian Coe. The head of the global governing body had spent a good amount of time during the opening days vigorously defending the decision to bring the championships to the Middle East. “It is the athletes themselves who have come here better prepared for a championship that will be remembered for a long time.... maybe in a large part to the almost perfect conditions that these guys have created in the stadium.” Before the last three sessions, a nearby super mall with its shops, ice rink and amusement park had generated more buzz than the Khalifa Stadium with its swathes of empty seats. The warning signs came early when the blue riband 100 metres on the opening weekend did not attract even a modest audience. American Christian Coleman’s win was greeted with a smattering of polite applause, while Jamaica’s Shelly-Ann Fraser-Pryce did a victory lap in a near-empty stadium with her sleepy son nestled in her arms.

Qatar has shown huge interest in hosting the world’s biggest sporting parties, including the 2022 soccer World Cup finals, but has displayed little desire to actually attend them. The futuristic air-conditioned Khalifa Stadium proved without doubt the country can build first-class facilities but hosting an event does not end when construction is completed. The crowds over the final three days were as manufactured as the stadium, with organisers giving away thousands of tickets to clubs and immigrant workers although the excitement was real. While track and field athletes competing in Khalifa Stadium did so in air-conditioned comfort, there was plenty of suffering and complaining on the Doha roads. Marathoners and race walkers were forced to run at midnight along a soulless, almost spectatorless route to avoid the worst of the extreme heat and humidity, with temperatures hovering around 30 Celsius when the marathons and walks started. Coe had little sympathy for those athletes who were complaining, saying at the midway mark of the meeting that they would be the ones leaving without winning titles. “The athletes talking about externalities are probably not the ones who are going to be walking home with medals from here,” he said. The rousing end to the championships provided an upbeat note for a sport that continues to wrestle with complex issues, including a Russian doping scandal that looks set to linger, with the country’s federation banned from the event. If that was not enough, the championships were hit with another unwanted distraction when renowned American coach Alberto Salazar was banned for four years for doping violations, the news landing in the middle of the IAAF’s biggest event. Salazar has denied any wrongdoing and said he would appeal. Track and field’s focus now turns to next year’s Tokyo Olympics before the 2021 world championships in Eugene, Oregon, home of the Nike Oregon Project which has been caught up in the sport’s latest doping scandal. The US Anti-Doping Agency (USADA) said Salazar was punished for “orchestrating and facilitating prohibited doping conduct” as head coach of the Nike Oregon Project (NOP), a camp designed primarily to develop U.S. endurance athletes. Nike has denied any role in administering performance-enhancing drugs and said in a statement on Tuesday that it does not condone the use of banned substances. “Nike is not a part of the organising committee, it’s just not, so the issue around Eugene is very clear,” said Coe, already defending the choice of Eugene as the next host city. “There is the organising committee, and there’s the (U.S.) federation who will be working closely together.”