CHARSADDA (92 News) – At least 13 people, including two policemen,  were killed and 36 others injured when a suicide bomber blew himself up in a court in Charsadda’s Shabqadar Tehsil on Monday. The incident occurred in a lower court of Shabqadar tehsil bordering the Mohmand area in Khyber Pakhtunkhwa province, when a suicide bomber detonated his suicide vest inside the court premises, killing eight people including two policemen and wounded 15 others. Emergency has been imposed in all hospitals, while police and paramilitary troops cordoned off the area for investigations. Rescue officials reached the spot and shifted the bodies and injured to nearby hospitals for medical care. Talking to 92 News, District Police Officer (DPO) Charsadda Sohail Khalid said that the explosion occurred when the policemen stopped the suicide bomber at the gate while he was trying to enter the court premises. On the other hand, Prime Minister Nawaz Sharif, Pakistan Tehreek-e-Insaf chairman Imran Khan, Pakistan People’s Party co-chairman Asif Zardari, Opposition leader in National Assembly Khurshid Shah, Interior Minister Chaudhry Nisar and other political leaders strongly condemned the blast in Charsadda and expressed grief over the loss of lives. 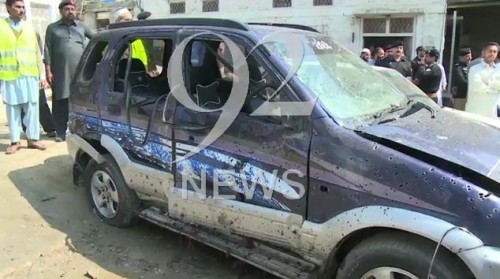