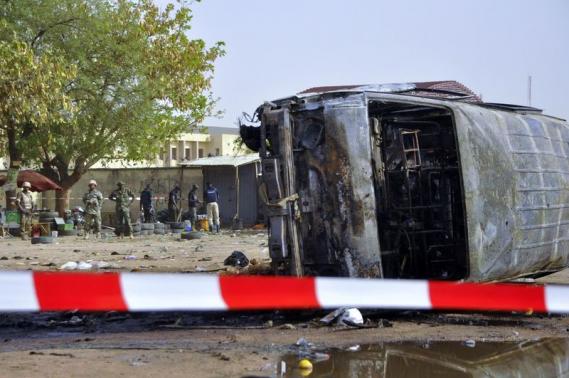 DAMATURU/KANO, Nigeria (Reuters) - Suicide bombers struck two bus stations in different parts of northern Nigeria on Tuesday, killing at least 26 people in attacks President Goodluck Jonathan blamed on Boko Haram, the Islamist militant group he said would soon be defeated. In the first, a suicide bomber rushed onto a bus in the northeastern town of Potiskum before setting off a blast that destroyed the bus and killed 16 people, according to security and hospital sources. A police spokesman said the bomber was a man, but that some witnesses had mistakenly blamed a teenage girl who was in fact one of the victims. On Sunday, a girl with explosives strapped to her killed five people outside a market in the same town. In Tuesday's second attack, two suicide bombers in a car struck a major bus station in the north's main city of Kano, killing at least 10 people, police spokesman Ibrahim Idris said. A Reuters witness saw the twisted, burnt wreckage of four vehicles and the charred remains of at least two bodies. "I saw the vehicle drive up to that point and just a few minutes later there was a loud blast," said witness Bello Gearam. "Some people were burning, others running." President Jonathan blamed Boko Haram, whose struggle for an Islamic state in religiously mixed Nigeria has killed thousands of people and displaced over a million. The use of suicide bombers has become a common tactic of Boko Haram since last year as the group expanded territory and became stronger and more deadly. But in the past three weeks it has begun to suffer a string of defeats in a military offensive by Nigeria and neighbours Cameroon, Niger and Chad, all of which have been destabilised by the Islamists. "TIDE HAS TURNED" "President Goodluck Jonathan condemns the reversion by the terrorist group Boko Haram to the callous bombing of soft targets ... in the wake of the rapid recovery by Nigerian troops and their multinational allies of areas formerly controlled by the sect," his office said in a statement. "The days of mourning victims of incessant terrorist attacks in the country will soon be over as the tide has now definitely turned against Boko Haram." A mine planted by Boko Haram killed at least two soldiers on Tuesday in the town of Bosso in Niger's southeastern region of Diffa, Niger's defence ministry said. Last Saturday, Nigerian troops backed by air strikes seized the northeastern border town of Baga from Boko Haram, the military said, a significant victory in the offensive. And on Tuesday, Chad claimed its soldiers had killed 207 Boko Haram militants and seized large stocks of weapons and ammunition in fighting near the Nigerian town of Gambaru, close to the border with Cameroon. But failure to protect civilians is a major criticism of President Goodluck Jonathan's administration ahead of an election scheduled for March 28. Yobe state and Kano have both seen many Boko Haram attacks but have never been taken over by the militants the way northeastern Borno state has and are hundreds of miles from the main theatre of the war against the insurgents. On Monday, defence spokesman Major-General Chris Olukolade said air strikes were under way on Boko Haram targets in the Borno state towns of Gwoza, where the group first declared an Islamic state, and Bama and Sambisa.