Sulk-free South Africa out to prove they are the best 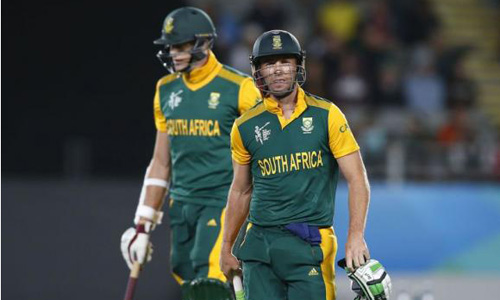 Sulk-free South Africa out to prove they are the best

WELLINGTON - South Africa still believe they are the best team at the World Cup despite defeats to India and Pakistan and will be out to prove it in their final pool match against United Arab Emirates, skipper AB de Villiers said on Wednesday. Victory over the Emirates in Wellington on Thursday will secure them second place in Pool B behind India and a quarter-final meeting with Sri Lanka in Sydney on March 18. The Proteas were one of the favourites ahead of the tournament but have dropped into the pack behind world champion India and the Australasian host nations after the two defeats. "We didn't expect to be five from five," De Villiers told reporters at Wellington Regional Stadium. "The World Cup is a funny tournament. You've got to take whatever comes your way, and we've had a rocky road. "But I guess if you look at the standings at the moment, we win the last game, we'll be in a good position to go with a lot of confidence into the quarters. "Yes, we would have liked to win those two big games against India and Pakistan. It didn't happen that way, and there's no time to sulk about that now. "Now it's important to be confident, and I still want the boys to believe we're the best, which we are. We're just going to go in with that kind of attitude in tomorrow's game, and then whatever comes around for the quarters, we'll take it head on." South Africa have a concern over the lower back of batsman Faf du Plessis, while paceman Vernon Philander will also have a fitness test on Thursday morning. Both of South Africa's defeats have come when they batted second under pressure but de Villiers said he was still confident there was not a total his side could not chase down. "We didn't get it right in the chases that we didn't play well in (but) I truly believe we can chase down anything. It's not a problem," he added. "We've done it in the last year a few times under pressure. We didn't get it right in the last couple of chases, and that's all right. Still confident in the batting unit. "I believe there are a few guys due for big runs, and it's going to happen soon, at the right time." – Reuters