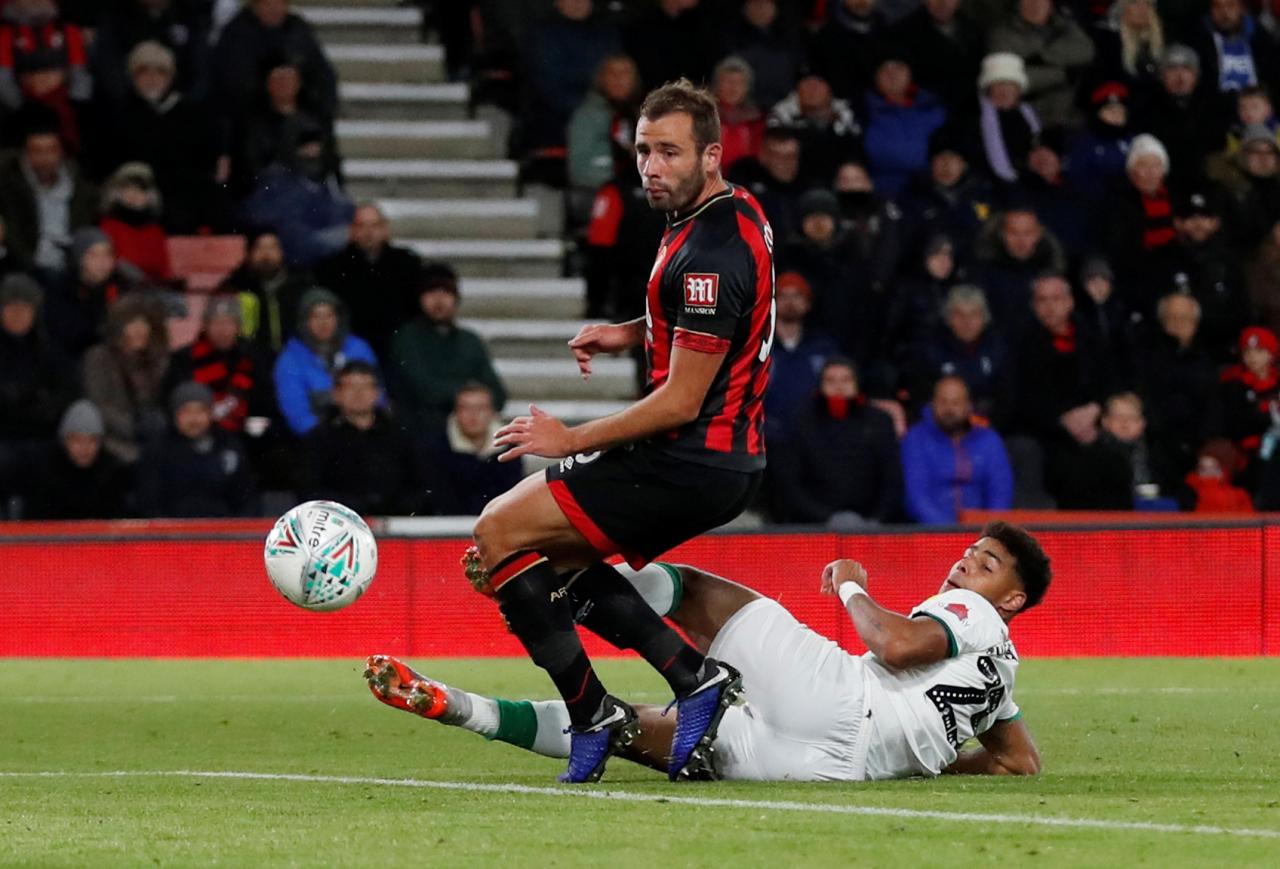 BOURNEMOUTH, England (Reuters) - A superb goal from Junior Stanislas helped Bournemouth reach the League Cup quarter-finals with a 2-1 win over Norwich City on Tuesday while third tier Burton Albion beat Nottingham Forest 3-2 to reach the last eight for the first time.
Bournemouth, who are flying high in sixth in the Premier League, opened the scoring in the 39th minute when Stanislas weaved into the area with a couple of stepovers and then rifled the ball into the net. It was a fantastic goal but harsh on second-tier Norwich, who had played well in the first half and went close when Dennis Srbeny’s effort came back off the inside of the post. Norwich were level with 20 minutes remaining through Onel Hernandez, but parity lasted only two minutes as a Bournemouth corner resulted in Steve Cook’s shot finding the net via a deflection on the line.
Burton’s victory was particularly sweet for manager Nigel Clough, who made more than 400 appearances for four-times League Cup winners Forest over two spells.
“To get to the last eight as a League One club is pretty special,” he told Sky Sports. “To get to the last 16 was a hell of an achievement. We’ve had our breaks but we’ve earned them and to be in the last eight is wonderful. We can’t wait for the draw.” Clough’s side missed a first-half chance to take the lead when Northern Ireland striker Liam Boyce blazed a penalty over the bar, but did open the scoring when Scott Fraser’s shot took a wicked deflection before looping into the net. Fraser added a second eight minutes later when he stroked home after being teed up by Boyce, yet Forest clawed a route back into the match when Lewis Grabban slotted home from six metres. Forest’s comeback hopes were stalled, however, with the goal of the game as Fraser turned provider, crossing for Jake Hesketh to volley home with superb technique, but there was still time for late drama as Forest substitute Arvin Appiah prodded home in stoppage time. Leicester City’s fourth round match against Southampton was postponed after the chairman of the Midlands club Vichai Srivaddhanaprabha was killed in a helicopter crash on Saturday.