Supporters protest outside Gelani's house against his custody

Supporters protest outside Gelani's house against his custody

ISLAMABAD (92 News) – The supporters of Hurriyat leader Syed Ali Shah Gelani on Sunday staged a protest outside his residence against his detention. Police used water cannon and tear gas on the protesters, which left several injured. A heavy contingent of police was seen camping outside the 84-year-old Hurriyat leader's residence after he was once again put under house arrest. Syed Ali Gelani thanked the Pakistan government and people for support the Kashmir cause, adding that the international community should take notice of India. On the other hand, the Indian police ended house arrest of Hurriyat leader Shabbir Ahmad Shah. Talking to media, he congratulated the Pakistan government for their stance against India, adding that Pakistan never left them alone in any situation. Meanwhile, Mirwaiz Umar Farooq said that Indian decision regarding the meeting of Hurriyat leaders with the Pakistani National Security Adviser was not right. 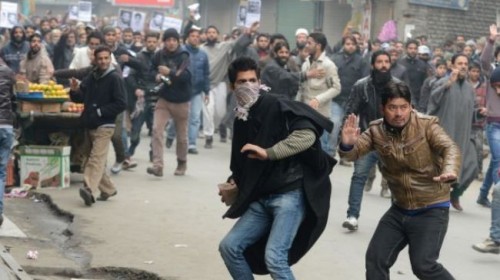