Supporters scramble for compromise on US Senate Iran bill 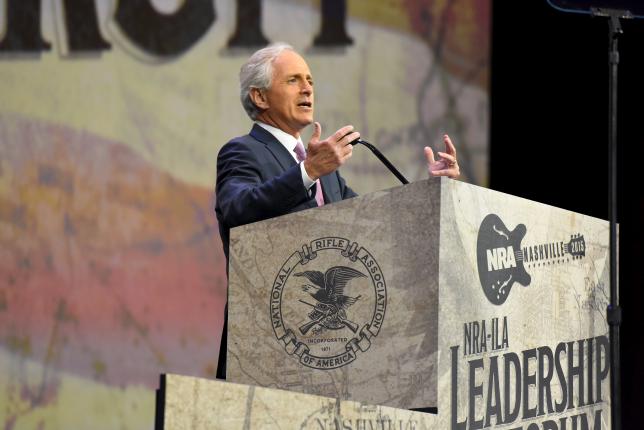 Supporters scramble for compromise on US Senate Iran bill

WASHINGTON - US senators scrambled to shore up bipartisan support for a controversial Iran nuclear bill before a committee meeting on Tuesday that could determine whether the legislation will survive President Barack Obama's promised veto. The Senate Foreign Relations Committee is scheduled to debate and vote on Tuesday afternoon on the measure put forward by Senator Bob Corker, the panel's chairman, that would give Congress a vote on any final nuclear agreement with Iran. The committee's Democratic and Republican leaders were trying to reach a compromise agreement on roughly 50 amendments to the bill that would change it enough to be passed by the panel with strong support from both parties. If the panel of 10 Republicans and nine Democrats approves the legislation, it would be sent for a vote in the 100-member Senate. A close committee vote would dim its prospects in the full chamber. Senator Ben Cardin, the panel's top Democrat, said he and Corker were trying to work out a compromise. "I think we can get to a place where we can deal with most of the White House concerns and maintain the purpose of the bill, which is an early congressional review and timely notice if there is a material breach (by Iran of an agreement)," he told reporters. Corker told reporters it was too soon to know what would happen. "Things are fluid, but it feels like things are going pretty well right now," he said. An April 2 framework nuclear deal Iran struck with Britain, China, France, Germany, Russiaand the United States seeks to limit the Iranian nuclear program in exchange for relief from economic sanctions. A final deal is due by June 30. Corker's bill would give lawmakers 60 days to review a final agreement, during which the Obama administration would be barred from giving Iran most sanctions relief and members could vote on whether to approve or reject sanctions measures. Obama promises to veto the bill in its current form. Administration officials have said it impinges on the president's authority and includes provisions that could kill any chance of reaching a final nuclear deal with Tehran. In a sign of the importance of the issue to the White House Secretary of State John Kerry and other top administration officials were holding classified briefings for the full House and Senate on Monday and Tuesday. Overriding a veto would require the approval of two-thirds of both the Senate and House of Representatives, meaning it would need the support of many of Obama's fellow Democrats. Lawmakers said it was far too early to know whether the bill would pass the Senate and House in the coming weeks, let alone win the backing of the 67 senators and 290 House members to override a veto. Republicans hold 54 seats in the Senate and 244 in the House. In particular, opponents want to remove a provision that would force Obama to certify thatIran has not supported any act of terrorism against the United States or any US citizen. They also want to shorten the 60-day review period. Democratic lawmakers have introduced amendments that would address both concerns. But Republicans have introduced amendments to make the legislation more restrictive. Senator Marco Rubio, who announced his presidential candidacy on Monday, offered an amendment requiring that Iran acknowledge Israel's right to exist. Passing the Republican amendments could doom the legislation by driving away Democrats willing to break with the White House and support a somewhat watered down version of the bill. - Reuters