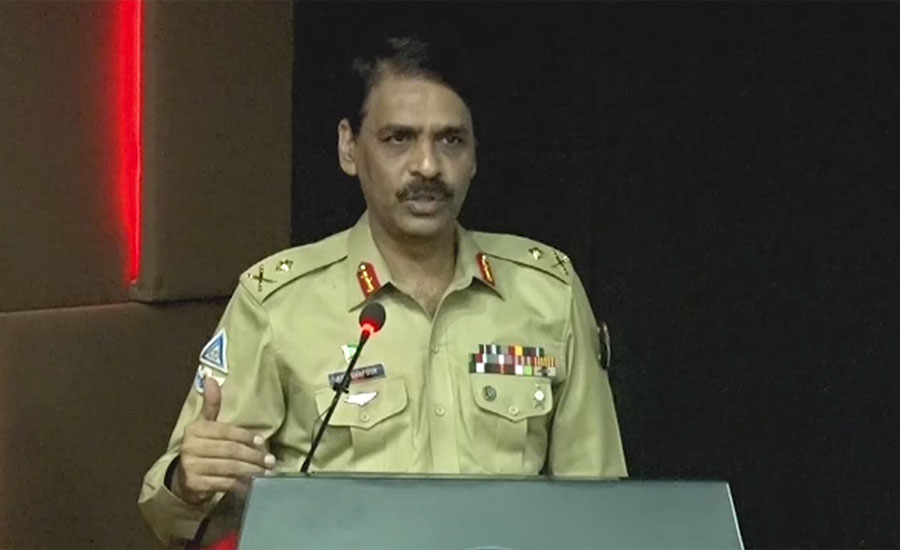 – Pakistan wants progress toward peace – Major-General Ghafoor said that Pakistan had a 70-year-old history with India in which Pakistan had always talked about peace. “We have told India a number of times that we want to progress towards peace but India has always showed aggression. Let me make this clear, if India resorts to a war with Pakistan, then we are ready to respond to it”, he said. The army’s spokesperson hit out at New Delhi saying that how is it possible that the Indian army managed to carry-out a surgical strike in Pakistan when even their drones are unable to cross into Pakistan. The director general ISPR has said India had seen the result of going at war with Pakistan and if one war hasn’t changed their attitude, 100 more won’t either. – Pak Army done which no force done in the world – Talking about the successes of Pakistani security forces against the terrorism, he said that Pakistan has come a long way since the start of Operation Sherdil in 2008, adding that it was a difficult journey Maj Gen Ghafoor said the political and military leadership joined hands to make these operations successful. He thanked the people of Pakistan and the political leadership for their support in making headway in operation Radd-ul-Fassad. He said that entire nation has made immense sacrifices in the war against terror. He said the end goal of Operation Rad-ul-Fassad is to maintain the writ of the state where the prerogative for use of force is held only with the state. He said that in last two years of Radd-ul-Fasad, more than 75,000 secret operations were carried out throughout the country in which more than 35,000 illegal weapons were recovered. – Kabul will translate into peace in Pakistan – He said that peace in Kabul will translate into peace in Pakistan. “We have seen a spillover of terrorism from Afghanistan in our country,” he said. He said that no country more than Pakistan wished for peace in Afghanistan because a peaceful Afghanistan meant a peaceful Pakistan. “Only a coalition government in Afghanistan can ensure peace”, he said, adding that development works in Afghanistan should remain in progress even after the United States exits the war-torn country. He said that the border with Afghanistan was 2611 kilometres long and one of the objectives of the Operation Radd-ul-Fasad was to fence the border with Afghanistan. – FATA not only bore the brunt of terrorism – Talking about the fallout of military operations that resulted in the displacement of thousands of people from erstwhile Federally-Administered Tribal Areas (FATA), he said that the people of Khyber Pakhtunkhwa and FATA not only bore the brunt of terrorism, but also gave up their properties to live in camps so that military operations could be carried out. – Restoration of IDPs – He said that the grievances of Internally-Displaced Persons (IDPs) have to be resolved and they need to be provided with education and livelihood. “The war that we are fighting now is for the rehabilitation of the people affected by terrorism. If we want to consolidate the gains in war against terrorism, we will have to focus on education”, said Ghafoor. – Army’s welfare projects – Dismissing the impressions in some quarters that defence budget or government land was being used in Pakistan Army’s welfare projects, he said that such claims were untrue and not a single penny from these sources were used in welfare projects run by Pakistan Army. – Defence budget goes back to government – “A big chunk from the defence budget goes back to the government in form of taxes, even the welfare organisations of the Pakistan Army pay their taxes”, he said. “The Pakistan Army meets its necessities while remaining within the budget allocated to it and no allocation of the Shuhada Package is used for the armed forces but the families of the army’s martyrs”, he said. – Pashtun Tahafuz Movement (PTM) – When asked about the Pashtun Tahafuz Movement (PTM), he said, “I’m sure the their leadership wants to work for the betterment of the country and will work with the government to this end.” About the demands of the Pashtun Tahaffuz Movement (PTM), he said that there was no objection on the fair demands of PTM. “If Pakhtun people come out with their rightful demands from the PTM platform, we have no objection”, he said.