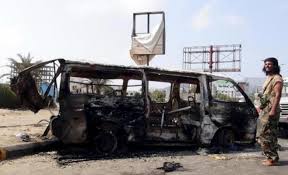 ADEN - Suspected al Qaeda fighters stormed a military base in Yemen's port town of Mukalla on Friday, killing at least five soldiers and ransacking its ammunition store, residents and local officials said. The attack came a day after the militants broke into Mukalla jail and freed scores of prisoners including a prominent local al Qaeda leader, identified by officials as Khaled Batarfi. Soldiers fled the base after the attack, residents said, and the suspected al Qaeda fighters also raided local banks, broke into local government buildings and set fire to the broadcasting station. Mukalla is a port town on the Arabian Sea, about 500 km (300 miles) east of Yemen's southern city of Aden, where Shi'ite Houthi fighters and their allies have been battling fighters loyal to President Abd-Rabbu Mansour Hadi. Hadi fled the city last week in the face of the Houthi offensive, which has continued to advance despite nine days of air strikes by a Saudi-led coalition aimed at driving back the Iranian-allied Houthis and restoring Hadi's authority. Yemen is grappling with multiple conflicts including a southern secessionist movement, tribal unrest and the threat in its east and central provinces from Al Qaeda in the Arabian Peninsula - a powerful regional wing of the jihadist movement. The ongoing Houthi conflict with the Saudi-backed coalition and Hadi loyalists may have given al Qaeda an opportunity to exploit the further disintegration of central authority in the impoverished Arabian Peninsula country. The Houthi offensive has also forced the United States to withdraw personnel from Yemen, halting a covert US drone war against al Qaeda militants. - Reuters