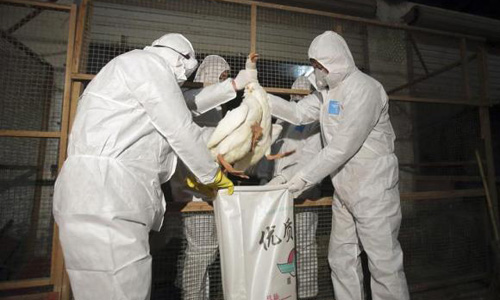 CHICAGO - A suspected case of avian influenza has been identified in poultry in Arkansas, the third-largest US turkey producer and home to Tyson Foods Inc, the nation's biggest chicken company, the US Department of Agriculture said on Tuesday. The infection, if confirmed, threatens to widen trading restrictions from countries such as Taiwan, Singapore and Nicaragua that have already limited US poultry exports due to bird flu outbreaks in states ranging from Minnesota and Missouri to California. "There is a suspect case in Arkansas, but testing is ongoing," USDA spokeswoman Lyndsay Cole said. Arkansas producers have been on alert for the virus since Minnesota and Missouri confirmed cases of highly pathogenic H5N2 bird flu in the past week. The Minnesota case was the first in the Mississippi flyway, a migratory route along the Mississippi River that also includes Missouri and Arkansas. Bird flu is contagious and can spread rapidly through a flock, killing birds in as little as 48 hours. The virus has not been identified in humans and is not expected to pose a public health risk, according to USDA. "It's in the wild bird flyway coming from Canada," Texas state veterinarian Dee Ellis said of the virus. "That's obviously how it went from Minnesota to Missouri to Arkansas." Ellis could not confirm the Arkansas case. On Wednesday, Texas will announce strengthened testing requirements for poultry coming in from states with bird flu outbreaks in a bid to keep out the virus, he said. No flocks grown for Tyson have been diagnosed with bird flu, spokesman Worth Sparkman said, adding the company had become more diligent about biosecurity at poultry farms because of the virus. The suspected case in Arkansas was found in a turkey flock, said Mike Cockrell, chief financial officer for Sanderson Farms Inc, the nation's third-largest poultry producer. He cited information from the Texas Poultry Federation.To prevent bird flu from spreading to its facilities, Sanderson is starting to bar outsiders from entering barns and to require increased cleaning of trucks hauling feed and chickens between farms, Cockrell said. In the past, employees have changed their clothes on airplanes after visiting infected locations, he added. Transmission "can happen, whether it comes in on feces on your boot or a piece of a feather that got on a shirt when you’re out doing environmental inspections on a farm," Cockrell said.H5N2 was also found in turkey flocks in Minnesota and Missouri. The facilities were immediately quarantined, flocks were culled and authorities said the birds would not enter the food system. – Reuters