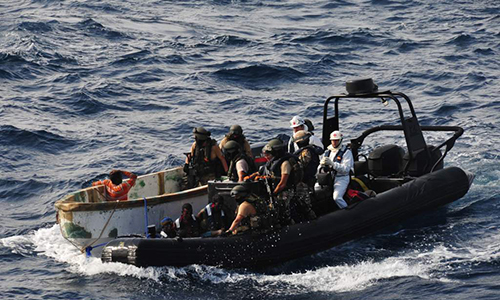 YENAGOA, Nigeria – Suspected pirates travelling by speedboat killed four soldiers and a policeman and stole weapons in a raid on a military base in Nigeria's oil-rich southern delta region, the police and armed forces said on Saturday. The gunmen attacked the mixed military and police Joint Task Force (JTF) base at Nembe in Bayelsa state at around 11.30 p.m. (2230 GMT) on Friday, police spokesman Asinim Butswat said. The delta region is home to most of the oil and gas reserves in Nigeria, Africa's biggest crude producer and also its biggest economy. "Four speedboats loaded with unknown gunmen, suspected to be sea pirates, attacked the JTF base at Nembe waterfront... killing four soldiers and one policeman," said Butswat. The suspected pirates took weapons from the base, he said. He said a combined military and police team was searching local creeks to find the attackers. Defence spokesman Colonel Rabe Abubakar said "suspected oil bunkerers" carried out the attack. Oil bunkering, the process of hacking into pipelines to steal crude then refining it or selling it abroad, has long been a major cost to Nigeria's treasury, which depends on oil for around 70 percent of its earnings. –Reuters