Swati announces to appear before SC over Islamabad’s IG transfer 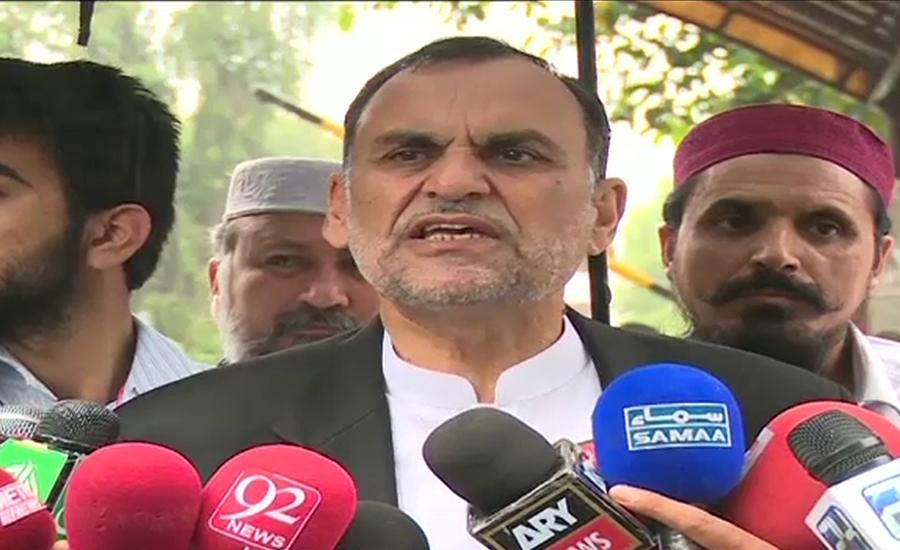 Swati announces to appear before SC over Islamabad’s IG transfer

ISLAMABAD (92 News) – Federal Minister for Science and Technology Azam Khan Swati on Monday announced that he would appear before the Supreme Court (SC) to present his stance over the matter related to transfer of Islamabad’s Inspector General of Police (IGP) Jan Mohammad. Speaking to the journalists, the federal minister stated he had not committed any wrongdoing in case pertaining to transfer of Islamabad IG. Giving explanation about the IG transfer, Azam Swati said that his house was attacked and employees were injured. “I approached Islamabad IG as a common citizen but he did not pick my call for 22 hours”, he added. The senator mentioned that he had approached Prime Minister Imran Khan and secretary interior and explained issue to them after several failed attempts at contacting IGP over an incident at his farmhouse. “Is seeking security from security personnel as a common citizen not my right,” he asked. Swati further said remarked that secretary interior also failed to contact suspended Islamabad IG despite several attempts. He stated that he would appear before the SC to present his stance. “I hope Chief Justice of Pakistan (CJP) Justice Saqib Nisar will fathom my stance on the matter,” he added. Earlier today, Chief Justice Mian Saqib Nisar had taken notice of the transfer of the IG and demanded the file from the Interior secretary. The SC has suspended the transfer order of Islamabad IG Jan Muhammad. He had also summoned the Secretary Establishment who told court that the PM Office was not satisfied with the performance of the IG. The chief justice said that why the Secretary Establishment should not be transferred. He asked the Secretary Establishment to submit the reply after getting instructions from the prime minister until Wednesday. “Is this Naya Pakistan in the making?” he remarked. The Interior secretary stated that he was not consulted in this regard. He said that the Secretary Establishment had transferred the IG. “You did not know that the IG had been sacked. He was your subordinate,” he remarked. During the hearing of a case, the CJP questioned why the Islamabad IG was transferred. He directed the Interior secretary to appear in court. “It has been heard that issue of the son of a senator or minister is going on. The government should inform court about the reasons of the transfer of the IG,” he remarked. The CJP remarked that they would not allow anyone to weaken the institutions. The IG was transferred after he refused action in a complaint by Federal Minister Azam Swati’s son. Swati’s son filed an FIR at the Shehzad Town police station against several for allegedly letting their animals into the former’s fields. On being stopped, the suspects attacked the employees with axes and also snatched weapons from the security guards and held them hostage, the FIR states. Police have now taken action against the suspects and arrested two women, a teenage girl and an elderly woman. A minor boy has also been arrested. The two women have been sent to jail while police have obtained physical remand of two other suspects, Ahsanullah and Niaz. The FIR was filed a day after the IG was transferred. The government came under fire in August over a similar issue, when a police officer was transferred after he stopped Khawar Maneka, Prime Minister Imran Khan’s wife’s former husband, for overspeeding. The issue was eventually resolved after the Supreme Court took notice of the issue and Maneka apologized.