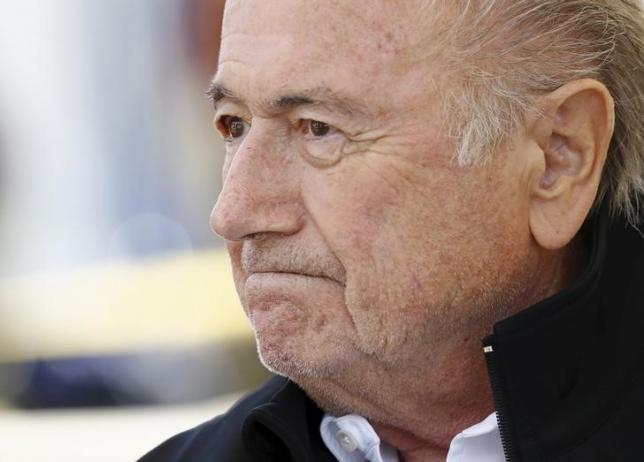 ZURICH - Swiss prosecutors have opened a criminal investigation into Sepp Blatter, the head of world football body FIFA, on suspicion of criminal mismanagement and misappropriation, the Swiss attorney general's office said on Friday. It said Blatter was interrogated after a meeting of FIFA's executive committee in Zurich, and authorities carried out a search at FIFA headquarters on Friday. "The office of the FIFA President has been searched and data seized," the office of the attorney general (OAG) said. It was the first time that authorities investigating corruption in the world's most popular sport had pointed the finger directly at Blatter, the 79-year-old Swiss who has run its powerful governing body since 1998. He has denied wrongdoing, and his U.S. attorney said he was cooperating with the Swiss probe. A source close to FIFA said that as Blatter has not been arrested, charged or indicted, it would probably be for him to decide whether he stays in his post until February, when he is due to step down. However, the source said: “It is over for him now, it is finished." In a sign of concern over the implications of the deepening investigation, Russia was quick to say that it would not affect its hosting of the 2018 World Cup, one of the biggest and lucrative events in sport. FIFA's awarding of the 2018 and 2022 tournaments to Russia and Qatar is one of the strands under scrutiny from U.S. and Swiss authorities investigating the alleged corruption in the organisation -- a source of concern for powerful sponsors like McDonald's Corp, Coca-Cola and Visa. The scandal exploded in May, when 14 football officials and sports marketing executives were indicted. PLATINI TESTIFIES The Swiss OAG said Blatter was questioned by its representatives, and Michel Platini, the former French football star who runs European football body UEFA, was also asked to give information. Platini is favourite to win the election to replace Blatter when he steps down in February. A Swiss law enforcement source said that Platini had provided Swiss prosecutors with evidence against Blatter and was not regarded as a target of investigators at this point. The source said that Swiss prosecutors were also in touch with several other witnesses at various levels of FIFA and its affiliates who have expressed interest in giving evidence about corruption in the organisation. Swiss investigators have been putting together their case against Blatter for some time, a law enforcement official said. The official said Blatter is not in custody and is free to travel, though he has largely avoided leaving Switzerland since May. CARIBBEAN CONTRACT The OAG statement said that Blatter was suspected of a "disloyal payment" of 2 million Swiss francs (£1.35 million) to Platini at the expense of FIFA, allegedly made for work performed between January 1999 and June 2002. The payment was executed in February 2011, the OAG said. The OAG said it also suspected Blatter of signing a contract in 2005 with the Caribbean Football Union that was unfavourable for FIFA and had "violated his fiduciary duties". Richard Cullen, a U.S. lawyer for Blatter, said: "Mr. Blatter is cooperating and we are confident that when the Swiss authorities have a chance to review the documents and the evidence they will see that the contract was properly prepared and negotiated by the appropriate staff members of FIFA who were routinely responsible for such contracts, and certainly no mismanagement occurred." According to the Swiss criminal code, Blatter could, if convicted, face a custodial sentence of up to five years depending on the circumstances of the offence. FIFA said in a statement that it had been cooperating with the Swiss authorities since May and complied with all requests for documents, data and other information. "We will continue this level of cooperation throughout the investigation." A spokeswoman for U.S. prosecutors declined to comment. The FBI said it did not comment on other agencies' investigations. TRAIL OF SCANDALS Blatter has survived a series of scandals during his term in office including widespread accusations that Qatar bought the right to stage the 2022 World Cup. Qatar has always denied any wrongdoing. Despite widespread calls for Blatter's resignation when the U.S. indictments were issued in May, accompanied by a series of arrests, he refused to withdraw his candidacy for another term at the helm of FIFA. He was duly re-elected, telling delegates: "Football needs a strong and experienced leader." As the scandal reverberated around the world and his position became untenable, he announced only days later that he would step down, though for the time being he remains in office until the election of his successor. "FIFA has been my life ... what counts most for me is FIFA and football around the world," he said at the time. -Reuters