Sydney among first cities to switch off lights for Earth Hour 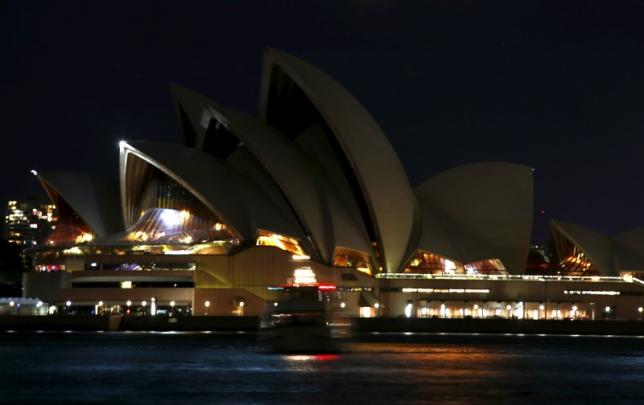 Sydney among first cities to switch off lights for Earth Hour

SYDNEY – Cities on Australia's east coast were among the first in the world to turn lights out on Saturday for the 10th annual Earth Hour, a global lights out event designed to highlight the threat from climate change. The Sydney Opera House, normally brightly lit, switched off its lights at 8:30 p.m. (0930 GMT), along with the Sydney Harbour Bridge and dozens more buildings across the city and Australia. More than 350 landmark buildings across the world including the Eiffel Tower, the Empire State Building and Taipei 101 will follow suit. This year's theme is a celebration of "Places We Love," such as beaches, forests, reefs, snow-capped mountains and rivers which could be at risk from climate change. Organizers hope this year's Earth Hour can tap a "new momentum" in climate action following world leaders' Paris agreement in December. That agreement set a course for global carbon emissions reduction to a net zero by 2100, shifting from fossil fuels in favor of greener energies such as solar and wind power. Average global temperatures last month were 1.35 degree Celsius (2.4 Fahrenheit) above normal for February, the biggest temperature excess recorded for any month against a baseline of 1951-80, according to NASA data released last weekend. Earth Hour Global executive director Siddarth Das, said in a statement that the world is at a "climate crossroads". "From living rooms to classrooms and conference rooms, people are demanding climate action," he said. "Earth Hour reminds us that while people are on the frontline of climate change, they are also our first line of defense. Our actions today, as individuals and the global community, have the power to transform what the world will look like for generations to come." Earth Hour began in Sydney in 2007 as an initiative of conservation group WWF and went global in 2008, attracting 50 million people, organizers say. This year organizers say events will be held in 178 countries and territories. –Reuters