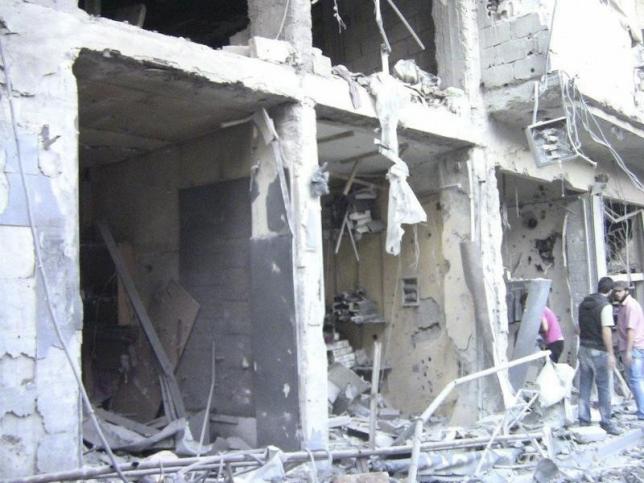 BEIRUT - A temporary ceasefire between warring parties in Syria collapsed on Saturday as negotiations failed to reach a more permanent agreement to end fighting in a town near the Lebanese border and two villages in the northwest, sources on both sides said. The ceasefire between the Syrian army and its Lebanese ally Hezbollah on one hand, and an alliance of Syrian insurgent groups on the other had been in effect since Wednesday in the town of Zabadani and the villages of Kefraya and al-Foua. Organized with help from Iran and Turkey, which back opposing sides in the conflict, the ceasefire was designed to give a chance for negotiations aimed at a more lasting cessation of hostilities in both areas. But Ahrar al-Sham, the rebel group leading the negotiations on behalf of the insurgents, said the talks had failed and insurgents had begun to step up military activity again. Hezbollah's al-Manar TV, citing its own sources, said the truce had ended without a final agreement on a ceasefire, and rebel positions near Zabadani were being shelled. Zabadani has been the focus of a weeks-long offensive by Hezbollah and the army against insurgent groups holed up inside. The area is of crucial importance to President Bashar al-Assad because of its proximity to Damascus and the Lebanese border. Insurgent groups had in turn launched a parallel attack on the two Shi'ite villages in the northwestern province of Idlib, an area bordering Turkey that is mostly controlled by insurgents after a series of advances against the Syrian army this year. Sources on both sides had said the negotiations were aimed at securing a withdrawal of rebel fighters from Zabadani and a withdrawal of citizens from the two villages. Ahrar al-Sham said it blamed the failure of the talks on the Iranian delegation with which it was negotiating, saying it was trying to effectively exchange one area for another. "The reason for the failure of the negotiations was the focus of the other side on demographic changes and its lack of concern for the humanitarian conditions of the civilians," Ahrar al-Sham spokesman Ahmed Qara Ali said in a written statement sent to Reuters. A rebel demand for the release of 40,000 prisoners "on a national level" was also rejected. Al-Manar's news report gave no explanation for the failure of the talks. Al-Manar reported clashes between the army and Hezbollah and armed groups to the east of Zabadani. Rebel fighters in Zabadani reached by Reuters also reported shelling by the Syrian army. In the northwest, insurgent shelling of the two villages early on Saturday killed a child and wounded 12 more people, state TV reported. The Syrian Observatory for Human Rights, a UK-based group that reports on the war, said the negotiations had stopped and the sides had returned to their leaders. - REUTERS