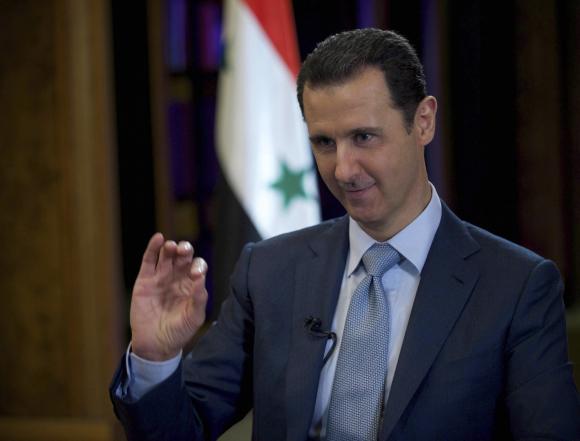 (Reuters) - Syrian President Bashar al-Assad said third parties including Iraq were conveying information to Damascus about the U.S.-led campaign of air strikes against the Islamic State militant group in Syria. In an interview with the BBC broadcast on Tuesday, Assad said there was no direct cooperation with the United States, whose air force has been bombing Islamic State in Syria since September as part of a strategy aimed at rolling back the group. Islamic State has seized wide areas of Syria and Iraq, declaring them part of a cross-border "caliphate". But the United States has said Assad cannot be a partner in the campaign against the group, describing him as part of the problem. The Syrian government is waging its own, separate campaign against Islamic State, including air strikes in areas that have also been struck by the U.S.-led alliance. It has been widely assumed the Syrian and U.S. armies have conveyed information about the movements of jets using the same air space. Asked if there was indirect cooperation, Assad said: "That's true, through third parties, more than one party, Iraq and other countries, sometimes they convey a message, a general message, but there is nothing tactical." Assad said the Syrian government had known about the U.S.-led campaign before it started but did not have details. The United States said in September it had informed the Syrian ambassador to the United Nations before the first strikes. Asked if there was ongoing dialogue via third parties, Assad said: "There is no dialogue. There is, let's say, information, but not dialogue." Iraqi officials say they have also passed information to the Shi'ite Islamist government inIran about the U.S.-led campaign against Islamic State. Iran is an important ally of Assad. The United States took a strong position against Assad after the uprising against his rule erupted in 2011, saying he should leave power, and has funneled support including limited amounts of military aid to some armed opposition groups. U.S. officials say they have not relented in their goal of Assad leaving power but, as has been the case for months, they see no policy likely to achieve this at an acceptable cost, and their priority has switched to fighting Islamic State. As a result, for months they have tacitly lived with Assad staying in power and made no bones that their focus is to combat the group rather than push Syria's president from power. SYRIA NO FAILED STATE The Syrian government has sought to consolidate control over the main urban centers in the western portion of the country, including Damascus. Islamic State has meanwhile seized control of much of the east and north. The Shi'ite-led government in Iraq, together with Iran and the Lebanese group Hezbollah, have been important allies for Assad in the conflict. Shi'ite Iraqi militias have fought on Assad's side against the insurgency spearheaded by Sunni Islamists. The Syrian Observatory for Human Rights, a British-based monitoring group, said on Saturday the death toll from nearly four years of civil war in Syria had risen to 210,000 people. Assad said Syria was not a failed state, saying the government and state institutions were still "fulfilling their duty toward the Syrian people". He also denied the army had used barrel bombs in its campaign against the insurgency. The use of barrel bombs - barrels packed with explosives and projectiles that are dropped from helicopters - has been criticized by Syria's opponents and human rights groups. "They're called bombs. We have bombs, missiles and bullets ... There is no barrel bombs, we don't have barrels," he said.