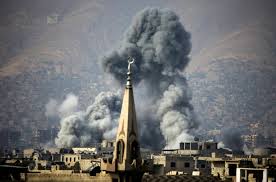 The deaths come despite the area falling within a so-called "de-escalation zone" put in place under a deal between government allies Russia and Iran and rebel backer Turkey.

Eastern Ghouta is already in the grip of a humanitarian crisis caused by a crushing regime siege of the area since 2013 that has caused food and medical shortages.

On Sunday, government air strikes on the areas of Mesraba and Madira killed 17 civilians, while artillery fire on the town of Douma killed another two civilians, the Britain-based Syrian Observatory for Human Rights monitor said.

"The toll could rise further because of the number of wounded people in serious condition," said Observatory director Rami Abdel Rahman.

Regime bombardment of Eastern Ghouta in the last two weeks has killed more than 100 people, according to the Observatory.

Rebels have also fired from the region into Damascus, killing several people.

Humanitarian access to Eastern Ghouta has remained limited despite the implementation of the truce zone, and a United Nations official referred to the region as the "epicentre of suffering" in Syria.

More than 340,000 people have been killed in Syria since the conflict began in March 2011 with anti-government protests.