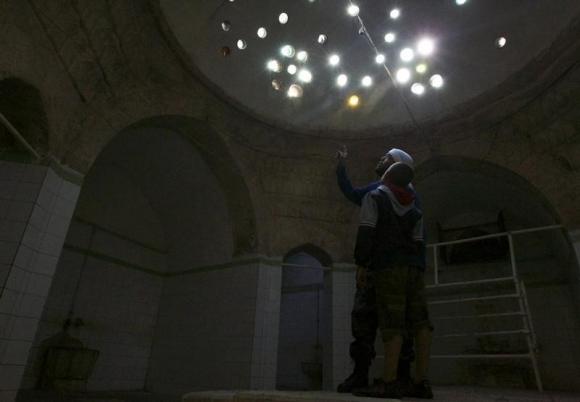 DAMASCUS - Syria has retrieved more than 120 antiquities looted from cemeteries in the millennia-old oasis city of Palmyra following years of destruction and war pillaging, its director of museums said on Wednesday. Looters have breached tombs and Roman temples have been damaged in Palmyra, once a vital stopping point for caravans crossing the Syrian desert carrying spices, silks and perfumes, said Ahmad Deeb told Reuters in his office in Damascus. Clashes between the army and rebels have damaged historical sites and buildings throughout Syria, during the four-year-long conflict that has also killed 200,000 people. "Special authorities in Palmyra have done great work during the last year when they returned more than 120 antiques, the most important of which were tombstones that were secretly excavated," Deeb said. Unfortunately, some of the looted artifacts have been moved outside Syria, he added. Syria is a cultural treasure trove and home to six UNESCO World Heritage sites. Four of these sites, including Palmyra and the Crusader castle Crac des Chevaliers, have been used for military purposes, the United Nations says. Nearly two dozen funeral busts and the headstone of a child from the necropolis at Palmyra were looted in November, according to UNESCO. From the 1st to the 2nd Century, the art and architecture of Palmyra married Greco-Roman techniques with local traditions and Persian influences, UNESCO says. Satellite imagery shows that 290 cultural heritage sites in Syria, which has a history stretching back to the dawn of civilization, have been damaged by the civil war, the UnitedNations' training and research arm said in December. To preserve its history, Deeb said all Syrian museums were emptied two years ago and the artifacts were put in stores. A list of antiquities smuggled from archaeological sites have been documented on a "red list" distributed to Interpol, he said. Deeb estimates that more than 1,500 items may have been stolen from museums in Raqqa, a city in northeastern Syria now controlled by Islamic State militants, and Deir Atiyah in northern Damascus. Some of are still in Syria, he said. As jihadists who adhere to a hardline school of Islam have grown in power, they present a new threat to Syria's heritage. Shrines and tombs in areas under their control have been targeted and destroyed as idolatrous symbols. More than 750 archaeological sites have been attacked, Deeb said. The UN Security Council last month banned all trade in antiquities from the war-torn country. - Reuters