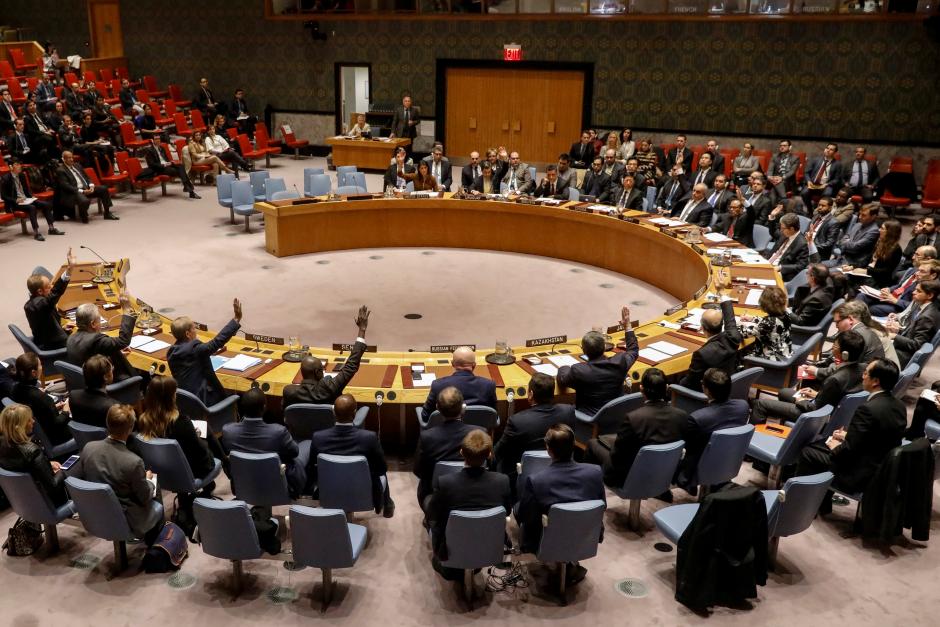 UNITED NATIONS (Reuters) - An international investigation into who is to blame for chemical weapons attacks in Syria will end after Russia blocked for the third time in a month attempts at the United Nations to renew the inquiry, which Moscow has slammed as flawed.

In the past two years, the joint U.N. and the Organization for the Prohibition of Chemical Weapons (OPCW) inquiry has found the Syrian government used the nerve agent sarin in an April 4 attack and has also several times used chlorine as a weapon. It blamed Islamic State militants for using mustard gas.

Russia vetoed on Friday a Japanese-drafted U.N. Security Council resolution to extend the inquiry for one month. It was an eleventh-hour bid to buy more time for negotiations after Russia blocked U.S.-drafted resolutions on Thursday and Oct. 24 to renew the investigation, which the council created in 2015.

Syrian ally Russia has cast 11 vetoes on possible Security Council action on Syria since the country’s civil war began in 2011. The Japanese draft received 12 votes in favour on Friday, while China abstained and Bolivia joined Russia to vote no.

After Friday’s vote, the council moved to closed-door discussions at the request of Sweden’s U.N. Ambassador Olof Skoog to “ensure we are absolutely convinced we have exhausted every avenue, every effort” to try and renew the investigation.

After a brief discussion, Italian U.N. Ambassador Sebastiano Cardi, council president for November, told reporters: “The council will continue to work in the coming hours and days, constructively, to find a common position.”

Russian U.N. Ambassador Vassily Nebenzia told the council earlier on Friday that the inquiry could only be extended if “fundamental flaws in its work” were fixed. He said that for the past two year the investigators had “rubber-stamped baseless accusations against Syria.”

The council voted on a rival Russian-drafted resolution on Thursday to renew the inquiry, but it failed after only garnering four votes in favour.

A resolution needs nine votes in favour and no vetoes by the United States, France, Russia, Britain or China to be adopted.

“Russia is wasting our time,” U.S. Ambassador to the United Nations Nikki Haley told the council.

“Russia’s actions today and in recent weeks have been designed to delay, to distract and ultimately to defeat the effort to secure accountability for chemical weapons attacks in Syria,” Haley said.

While Russia agreed to the creation of the inquiry two years ago, it has consistently questioned its work and conclusions.

The April 4 sarin attack on Khan Sheikhoun that killed dozens of people prompted the United States to launch missiles on a Syrian air base. Haley warned on Thursday: “We will do it again if we must.” Despite the public deadlock and war of words between the United States and Russia at the United Nations, White House spokeswoman Sarah Sanders said on Thursday that President Donald Trump believed he could work with Russian President Vladimir Putin on issues like Syria. Syria agreed to destroy its chemical weapons in 2013 under a deal brokered by Russia and the United States.