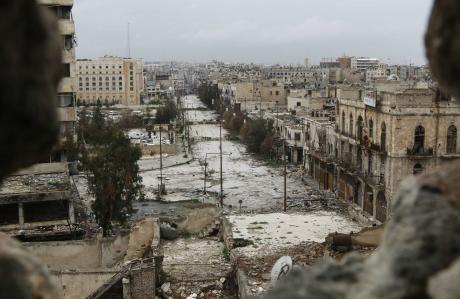 UNITED NATIONS (Reuters) - The Syrian government is willing to suspend its aerial bombardment and artillery shelling of the northern city of Aleppo so that a local ceasefire can be tested, the United Nations mediator on Syria said on Tuesday. Aleppo is at the forefront of clashes between pro-government forces and a range of insurgents, including Islamist brigades, al Qaeda's hardline Syria wing, Nusra Front, and Western-backed units. The Syrian army, backed by allied militia, has captured several villages near Aleppo in battles aimed at encircling the northern city and cutting off insurgent supply lines, a monitoring group said. U.N. mediator Staffan de Mistura said opposition forces would be asked to suspend mortar and rocket fire. "The government of Syria has indicated to me its willingness to halt all aerial bombing ... and artillery shelling for a period of six weeks all over the city of Aleppo from a date which we will be announcing from Damascus," de Mistura told reporters after briefing the U.N. Security Council. He said he would travel to Syria as soon as possible. "I have no illusions because, based on past experiences, this will be a difficult mission to be achieved," de Mistura said. "Facts on the ground will prove if the freeze holds and can be replicated elsewhere." Syria's U.N. ambassador, Bashar Ja'afari, declined to comment. The Western-backed opposition Syrian National Coalition said it awaited a detailed proposal from de Mistura. "The Assad regime's compliance with any such proposal will be judged by actions, not words," said the coalition's special representative to the United Nations, Najib Ghadbian. "And thus far, his actions have been only brutality and terror." De Mistura, who has been working since October on his plan to negotiate "local freezes" that would start with Aleppo, told the Security Council he had a long meeting with President Bashar al-Assad during a recent visit to Syria, diplomats said. "Every time there is a proposal of a ceasefire ... history has proven that there is some type of acceleration in order to take a better position," de Mistura said. "I fear that could be the case." More than 210,000 people have died in the Syrian conflict, which will enter its fifth year next month. Peaceful protests against Assad in March 2011 degenerated into an armed insurgency following a fierce security crackdown.