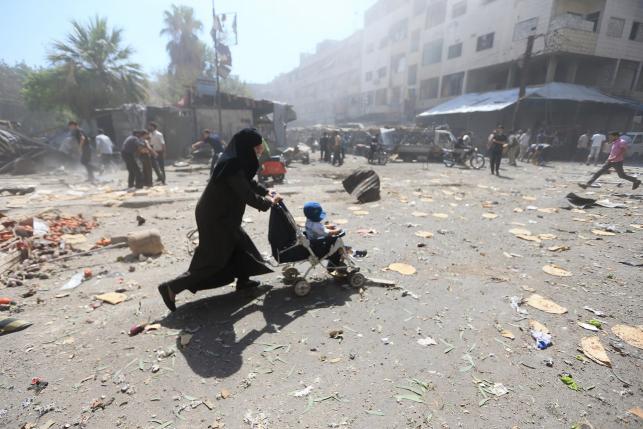 BEIRUT – Syrian government air strikes on rebel-held areas near Damascus killed at least 31 people on Wednesday, and insurgents bombarded the capital with rockets that killed at least 13 people, the Syrian Observatory for Human Rights reported. The violence came ahead of an expected visit by Iran's foreign minister to Damascus to discuss a new plan to resolve the more than four-year-long civil war. Warplanes targeted several areas in the insurgent-held district of Eastern Ghouta on the capital's outskirts, the Britain-based Observatory said, killing at least 31 people and wounding another 120. In YouTube videos that purported to show the aftermath of the strikes, emergency workers and residents pulled charred bodies from buildings damaged or reduced to rubble in the town of Douma to the northeast of Damascus. The Observatory said more than 50 shells hit central Damascus in a bombardment by insurgents that wounded 60 people. The state news agency put the death toll at five. Central Damascus, Assad's seat of power, has been mostly spared the worst of the conflict. Iranian Foreign Minister Mohammad Javad Zarif was expected to head for Damascus from Beirut later in the day, according to Iranian state media. An Iranian Foreign Ministry spokeswoman said he would be discussing a new plan to resolve the war. Iran has been a crucial ally for President Bashar al-Assad during the war, which has killed a quarter of a million people. –Reuters