Syrian army command says it has regained most of eastern Ghouta 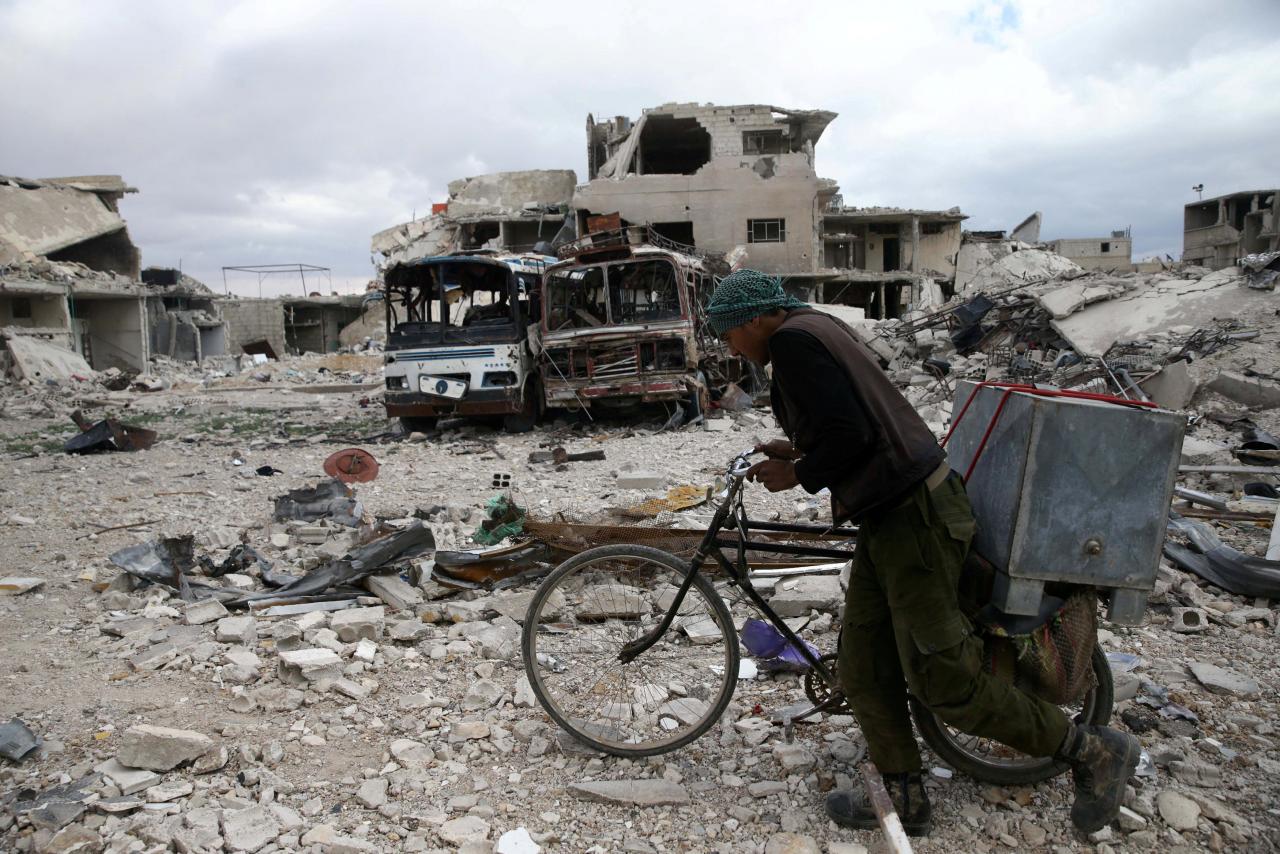 Syrian army command says it has regained most of eastern Ghouta

AMMAN (Reuters) - The Syrian army command said on Saturday it had regained most of the towns and villages in eastern Ghouta and was pressing its military operations in the last rebel bastion of Douma. In a televised statement, the Syrian army spokesman said the weeks-long military campaign had now brought security to the Syrian capital, Damascus, and also secured its main links to other parts of the country, stretching north and all the way to the Iraqi border to the east. A last group of fighters and families had earlier left the main towns of Jobar, Zamalka, Arbeen and Ain Tarma after the fall of other towns, leaving only the city of Douma still in rebel hands. Footage on state television showed top army commanders entering by the same route the rebel convoys had used to leave. Tens of thousands of people have now evacuated once-bustling towns in the suburbs east of the capital, which had nearly 2 million people before the start of the conflict and were major commercial and industrial hubs. The army command said military operations were continuing in the outskirts of the city of Douma, controlled by the Jaish al-Islam rebel group, the last patch of eastern Ghouta still held by insurgents. Douma’s fall would seal the rebels’ worst defeat since 2016, driving them from their last big stronghold near the capital, and would also carry potent symbolism. The town was the main center of street protests in the Damascus suburbs against President Bashar al-Assad’s rule that ignited the conflict seven years ago. The army said hundreds of rebels had been killed in the ferocious offensive. The opposition says a relentless air campaign was waged in which the army used napalm, chlorine and incendiary bombs to demoralize rebels by targeting civilian areas. The rebels say the indiscriminate bombing forced them to capitulate and agree to surrender deals that force them either to make peace or leave to rebel-held areas after weeks of bombing and sieges that prevented food from reaching the enclaves. The Syrian army has repeatedly said regaining control over rebel-held suburbs would stop rocket attacks on the capital. They deny that many civilians were killed in bombardments that rescuers and residents say reduced whole neighborhoods to rubble in densely populated areas where at least 350,000 people lived. Defense analysts say a major goal of the campaign was to complete a security belt around the capital, where for years rebels dug into an elaborate network of tunnels and well- fortified positions had resisted countless offensives to seize the enclave. President Assad said recently securing eastern Ghouta, which was the soft belly of the heavily defended capital, had foiled plots by his foreign enemies to topple him. “The gains have been achieved after units of the army eliminated hundreds of terrorists, their headquarter and their fortifications,” the army statement said. Douma is surrounded by government forces, many of whom were elite forces from the Republican Guards and special army units, who have been amassing troops in recent days and threatening to storm the city if the rebels do not agree to leave. Tens of thousands of civilians remain in Douma, which is the largest urban center in the enclave, facing worsening humanitarian conditions. The rebels there deny they are negotiating an evacuation deal and say talks with the Russian military aim to find a solution that would allow them to stay in the city under Moscow’s protection. Negotiators, however, reached a deal with the Russian military late on Saturday to evacuate wounded in the city to insurgent-held areas in northwestern Syria, local sources said. It was not clear if the step would pave the way towards a broader deal to evacuate fighters in an arrangement similar to one that was brokered by the other main rival rebel group, Failaq al Rahman, with Moscow that has allowed most of its fighters to leave their former areas of control. The Syrian army offers defeated rebels either the option of making peace and switching sides or surrendering their weapons and leaving for government-controlled areas. “Army units are continuing their combat operations to rid Douma of terrorists,” the army statement said. The Russian-backed offensive in eastern Ghouta has killed more than 1,600 civilians and thousands of wounded, rescuers said. The authorities say about 150,000 people have now been displaced from eastern Ghouta. Thousands of people — fighters, their families and other civilians — have been leaving for northwestern Syria from other parts of eastern Ghouta in convoys of buses that have been given safe passage to Idlib province. Many evacuees who arrived at rebel-held territory after a grueling trip through government-controlled villages said many residents hurled abuses and threw shoes and stones at their buses. The conflict began after mass protests calling for an end to Assad’s authoritarian rule on March 15 2011, dragging in regional and global powers and forcing millions of people - more than half the pre-war population - to flee their homes.