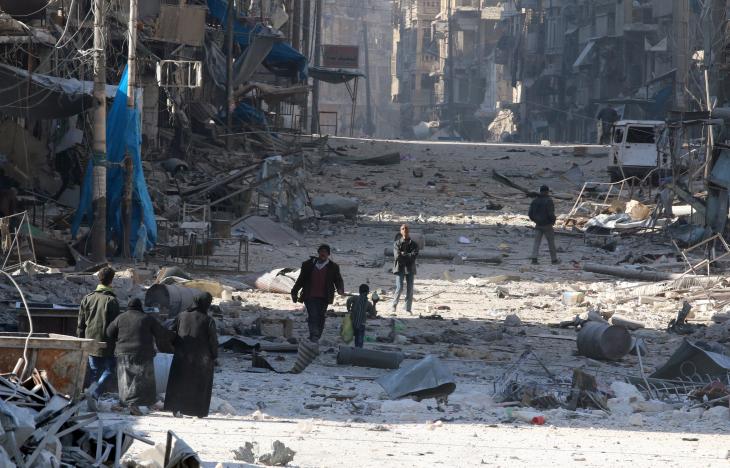 AMMAN - The Syrian army escalated aerial bombing of a rebel-held valley northwest of Damascus in an offensive begun last week to recapture the strategic area where a major spring provides most of the capital's water supplies, rebels and residents said on Tuesday. They said the army shelled and bombarded several towns in Wadi Barada valley about 18 km (11 miles) northwest of the capital in a major offensive launched since Friday. The roads leading to the towns in the valley and the mountain cliffs surrounding the area are under the control of elite Republic Guards and the Lebanese Shi'ite Hezbollah group, they said. Residents said fighting on Monday focused on Baseimeh village at the edge of the valley where the army and its allies are pushing to advance deeper in an enclave where 10 villages are inhabited by an estimated 100,000 people. The rebels said the army was emboldened by gaining full control of Aleppo city and was seeking to force them to either leave or face all out war. "They are seeking to push us into a surrender deal to and we will not hand over our land," said Abu al Baraa, a commander in Ahrar al Sham, a rebel group present in the area. Through a series of so-called settlement agreements and army offensives, the Syrian government, backed by Russian air power and Iran-backed militias, has been steadily suppressing armed opposition around the capital. Alongside the main spring in Wadi Barada, the area lies on the road from Damascus to the Lebanese border that is used as a supply line for the powerful Iranian-backed Hezbollah group which is heavily involved in fighting alongside Syrian President Bashar al Assad's army. A resident and rebels said the aerial bombing has put out of commission the main Ein al Fija spring's water pumping station where a underground pipeline normally provides around 65 percent of the water to the capital's neighbourhoods. A picture taken by a rebel and seen by Reuters showed the pumping station's ceiling has collapsed. Several videos uploaded on social media show damage and fires with plumes of smoke near the pumping station. Others show damage to houses. Rebels and residents said the bombing has also killed 14 civilians and hit a medical clinic and civil defence unit in the area that has been besieged with limited access for food and fuel. The army said it was targeting "terrorists." The Syrian army has blamed rebels for polluting the springs with diesel fuel in a move the water authorities said had forced them to cut supplies coming into the capital and resort to reserves to temporarily cover the shortfall. The rebels have allowed the government's water authority engineers to maintain and operate the station and supply the capital since they took control of the area in 2012. The rebels draw from both Islamist and Free Syrian Army factions. Fighters from the area have cut water supplies several times in the past as a pressure card to prevent the army from overrunning the area. But they deny poisoning the water as they say it would harm them before anyone else.