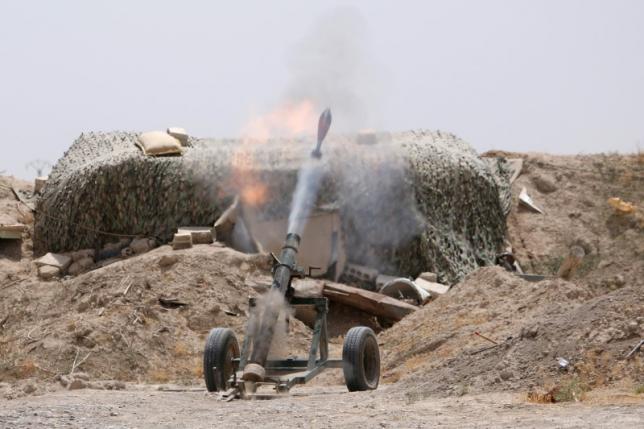 BEIRUT – The Syrian army backed by Russian air strikes has advanced towards Islamic State-held Raqqa province in a new offensive, a group monitoring the war said, nearing a region where U.S.-backed militias have also attacked the jihadist group. Heavy Russian air strikes hit IS-held territory in eastern areas of Hama province near the provincial boundary with Raqqa on Friday, where the army had advanced some 12 km (7 miles), according to the Syrian Observatory for Human Rights. The army was around 12 km from the Raqqa provincial boundary. U.S.-backed militias including the Kurdish YPG are pressing a separate, multi-pronged attack against IS in Raqqa province and neighbouring Aleppo province, which escalated this week with a push towards the city of Manbij near the Turkish border. A pro-Damascus Lebanese newspaper said the Syrian army was entering "the race for Raqqa" with its new offensive. A Syrian military source, however, said that reports of an attack targeting Raqqa were "expectations", and that both Raqqa and Deir al-Zor, also in the hands of IS insurgents, were possible targets of army operations. The army announced on Thursday a new operation backed by Russian air strikes in the Athriya area of eastern Hama province close to the provincial border with Raqqa. State media said the army had made territorial gains and inflicted heavy casualties. "There is progress from Athriya on two fronts but the coming direction is not set," the military source said. Raqqa city is Islamic State's de facto capital, and the province has been a major base of operations for the group. The Syrian military source said the army was focused on eastern and northern areas of both Homs and Hama provinces "in the direction of Daesh (IS) gatherings". Homs province borders the Islamic State-dominated Deir al-Zor region which links the territory it controls in Syria with the territory it holds in Iraq. "The field leadership does not give information about the main direction or the secondary direction, but the direction is open to two possibilities - Deir al-Zor and Raqqa," the source said. The Lebanese newspaper al-Akhbar said the first aim was to capture the town of Tabqa in Raqqa, the location of an air base and major IS arsenal, and to put "a foot in the area without leaving it completely to the Americans' allies". The U.S.-backed Syria Democratic Forces alliance (SDF) launched an attack in that direction last week. The SDF has also begun an offensive against IS-held areas in Aleppo province, beginning with the Manbij area. That thrust, supported by U.S. special forces, aims to deny Islamic State any access to the Turkish frontier. Al-Akhbar said the new Syrian army operation did not aim to reach Raqqa city "in the coming weeks", but the goal was at least to reach Tabqa city and Lake Assad, which it overlooks. Tabqa is some 50 km (30 miles) west of Raqqa city. Islamic State captured Tabqa in 2014 at the height of its rapid expansion in Syria and Iraq. The Syrian army advanced to the border between Raqqa and Hama provinces in February. A military source said at the time Tabqa would be the first target of a Syrian government attack in Raqqa province. Russia's ambassador to the United Nations said in April the Syrian army was planning offensives against the cities of Deir al-Zor and Raqqa with the support of the Russian air force, which has been backing government forces on the battlefield for several months. –Reuters