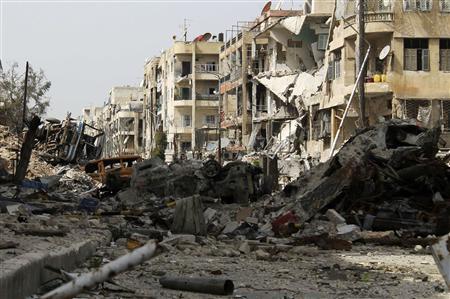 BEIRUT - The Syrian army said on Monday it had captured several villages in the southern province of Deraa, cutting a supply route used by insurgents to smuggle weapons and fighters from Jordan to Damascus's Eastern Ghouta region. A Syrian security source said Monday's operation was part of a wider plan to secure the province of Deraa. "The importance of this achievement is that it reopens the road between Deraa and Sweida," the army said in a statement publish on Syria's state news agency. "It also cuts the terrorist groups' supply lines by closing the gate of Lujat which was used to smuggle weapons and mercenary from Jordan towards Eastern Ghouta in the Damascus countryside." Sweida is home to the minority Druze population who have mostly stayed out of the Sunni-led revolt against Syrian President Bashar al-Assad. The army said it had also surrounded the town of Busra al-Harir, 37 km (23 miles) northeast of Deraa. It was the first major government operation in the southern province of Deraa since the insurgents seized a border crossing with Jordan earlier this month. The Syrian Observatory for Human Rights, which monitors the Syrian war, said the insurgents backed by Islamist groups such as al-Nusra Front had repelled the government attack aimed at seizing Busra al-Harir. The southwestern corner of Syria is the last notable foothold of the mainstream rebellion against Assad. Elsewhere, the mainstream groups have largely been eclipsed by jihadists, including Islamic State and the al Qaeda-linked Nusra Front. - Reuters