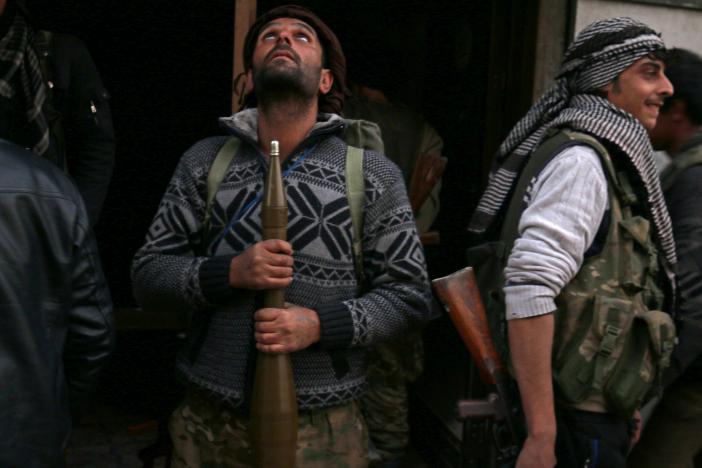 BEIRUT - Syrian government forces pressed an offensive in Aleppo on Thursday night and into Friday with ground fighting and air strikes, Reuters witnesses, rebels and a monitoring group said, part of a push to retake all of the city's besieged rebel-held east. "Helicopters, warplanes and rocket bombardment like every day. Nothing has changed," a Turkish-based official with the Jabha Shamiya rebel group told Reuters, describing the situation as of 9:30 a.m. on Friday. The official added that despite the bombardment, "the guys are steadfast". Syrian government and allied forces have in the last two weeks driven rebels from most of their territory in what was once Syria's most populous city. The rebels have controlled the eastern section since 2012, and Syrian President Bashar al-Assad said in an interview published on Thursday that retaking Aleppo would change the course of the civil war across the whole country. A military source told Reuters: "Until now 32 neighbourhoods have been liberated out of an original 40 in east Aleppo... The advance is going according to plan and is sometimes faster than expected." The Syrian Observatory for Human Rights, which monitors the conflict, said government rocket attacks continued overnight into Friday morning on frontline areas of east Aleppo. During a tour of Old Aleppo, Reuters journalists counted the sound of nine air raids in about half an hour. A Reuters witness in rebel-held Aleppo said there were intense clashes in Sheikh Saeed on Friday. That is in the south of the eastern sector, where the Observatory and a Syrian military source said government forces advanced on Thursday. Russia's RIA news agency quoted Foreign Minister Sergei Lavrov late on Thursday as saying the Syrian army had halted military activity to let civilians leave rebel-held territory. Russia's air force and Shi'ite militias from Arab countries are also fighting in Aleppo on the government side.-Reuters