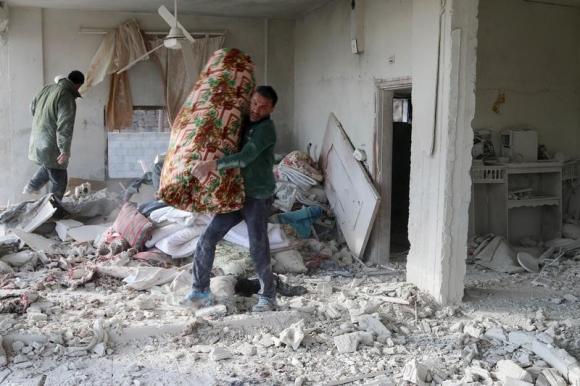 UNITED NATIONS - The people of Syria feel "increasingly abandoned by the world" as global attention focuses on Islamic State militants, while violence and government bureaucracy hinder attempts to deliver aid to 12 million people, UN chief Ban Ki-moon said on Monday. In his 13th monthly report to the United Nations Security Council on Syria, Ban said a lack of accountability during the four-year civil war has also led to a rise in allegations of war crimes, crimes against humanity and other human rights abuses. "While global attention is focused on the threat to regional and international peace and security which terrorist groups such as ISIL (Islamic State) and (al Qaeda's) Nusra Front pose, our focus must continue to be on how best to help and support the Syrian people," Ban said in the report, seen by Reuters. Ban said more than 220,000 people have been killed since security forces cracked down on a pro-democracy movement in 2011, sparking an armed uprising. Some four million Syrians have fled the country and 7.6 million are internally displaced. Extremist Islamist groups have exploited the chaos and complicated diplomatic efforts to end the conflict with Islamic State, declaring a caliphate in the swaths of territory it has seized in Syria and Iraq. A US-led alliance has been targeting Islamic State with air strikes in Iraq and Syria for some six months. Ban said delivery of aid was becoming more challenging due to "violence and insecurity, shifting conflict lines, deliberate interference by parties to the conflict and administrative procedures which constrain effective aid delivery." While aid is reaching several million people, Ban said the situation for some 4.8 million people in hard-to-reach areas, especially 212,000 people in besieged areas, was of "grave concern," hospitals and schools are being attacked, and international aid funding has failed to keep pace with needs. The United Nations is seeking some $8.4 billion to meet the humanitarian needs of the Syrian conflict in 2015, after only securing about half the funding it asked for in 2014. Ban said a pledging conference in Kuwait on March 31 would be crucial. He said UN cross-border aid deliveries of food rations from Turkey and Jordan had reached more than four times as many people - some 771,000 - in the three months to end-February compared with the previous three months. However, access to medical supplies and equipment "continued to be restricted by insecurity and constraints imposed on humanitarian operations by parties to the conflict." Ban said many delivery requests were going unanswered by the government and surgical supplies were also being removed from convoys by security forces.