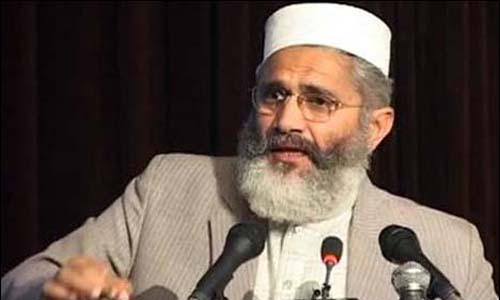 LAHORE (92 News) – Jamaat-e-Islami ameer Sirajul Haq has said that the system will change only by changing the leadership. Addressing a labourers’ convention in Lahore on Monday, he said that all the people talk about the bad system, but in fact 500 people in the parliament and Senate are the system. The people should change these political pundits. “The present system is destruction for the poor,” he maintained. He said that the people should support the Nizam-e-Mustafa. “We will give a subsidy to the people getting salary less than Rs 30,000.” The JI chief said that the government should give the rights to labourers before a sea of labourers heads towards Islamabad. He said that loadshedding is an outcome of mismanagement of the government. “The per unit cost is Re 1, but the price of Rs 18 per unit is charged from the consumers,” he said.