Szczesny ready for Cup glory but Arsenal future in doubt 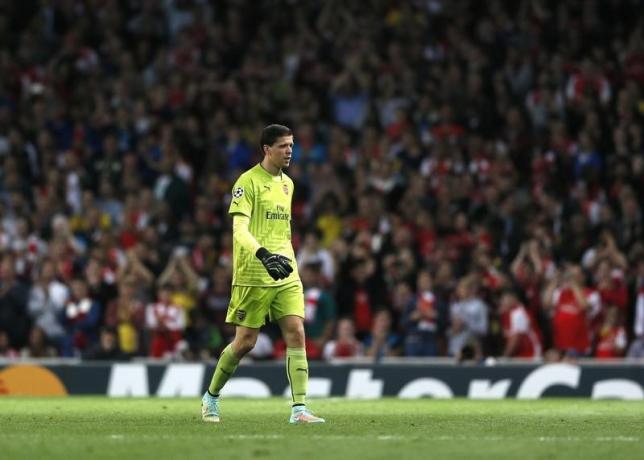 Szczesny ready for Cup glory but Arsenal future in doubt

LONDON - If Wojciech Szczesny was still Arsenal's first choice goalkeeper he would be sitting on the bench watching Saturday's FA Cup semi-final against Reading rather than playing in it, said manager Arsene Wenger. But unlike last year's semi-final when he was among the substitutes watching fellow Polish international Lukasz Fabianski playing against Wigan Athletic, Szczesny will be in goal while Colombia keeper David Ospina has the afternoon off. It might also be one of Szczesny's last appearances for the club after nine years in north London as Wenger could not say for certain that the Pole would be content to stay having lost the No.1 spot after 3-1/2 seasons as his first choice. The only matches Szczesny has played since losing his place following the 2-0 defeat at Southampton in the Premier League on New Year's Day have been in the Cup against Brighton, Middlesbrough and Manchester United. However, even though Wenger said he thought Szczesny had an excellent game in the 2-1 sixth-round win at Old Trafford, the Frenchman remained non-committal about his keeper's future. "I hope Wojciech stays, but at the moment it is very difficult to answer that question," he told reporters. Last season, when Arsenal won the FA Cup to end a nine-year trophy drought, Szczesny did not play in the competition but since being replaced by Ospina in January his only appearances have come in the cup. Wenger, speaking at Arsenal's training ground, left no-one in any doubt who was now Arsenal's No.1. "I replaced Wojciech because he had a bad game," Wenger said. "I still think he is a great goalkeeper and I want him to have the opportunity to show that. But if Wojciech remained No.1, Ospina would be playing on Saturday." Szczesny was dropped after the defeat at Southampton when he was also fined 20,000 pounds ($29,918) by the club for smoking in the showers afterwards. Arsenal's form has improved dramatically since then and they have won 13 of the 15 matches Ospina has started and 16 of their last 18 in all competitions. Wenger did not agree that their improved form was just down to the change, explaining: "We had many players who were out in the first part of the championship and they have all come back and been in form since January." - Reuters